One of the reasons we had wanted to go to D.C. was the baby panda, appropriately named Bei Bei. So what better way to start our Valentine’s Day than to go to the National Zoo and see all the animals? The only problem was that it was approximately 12 degrees out and that makes for a not happy Melissa. Thankfully the zoo has a bunch of indoor exhibits to take refuge, so we hung out with the pandas (SO CUTE), elephants, gorillas (this one smelled exceptionally bad) and reptiles. While I wish it was warmer, I’m glad we went when we did. We got there early and beat the crowd to see Bei Bei. Admission is also free which is great if you take advantage if the metro which we did not, but parking was $22 per car which wasn’t terrible for the four of us. 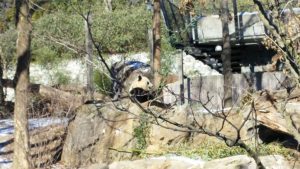 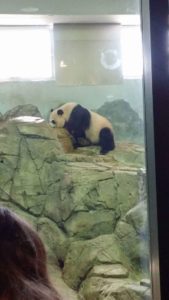 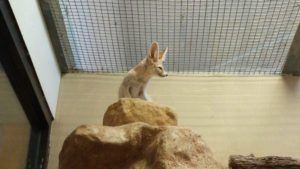 After the zoo, we went back to Mad Fox Brewing Company in DC. There are two locations, and I believe the one in Virginia does the actual brewing. But that’s okay. We got three flights to split to try a little bit of everything and ordered brunch. On the brunch menu was an item called a cinnabomb for $5. When asked, the waitress said that 3-4 people could split it but we were thinking she was underestimating us. But when we got 2 and they came out after the meal, we realize that she definitely undersold the cinnabomb. This thing was huge. And oh so delicious. So yes, if you are planning a trip, go for brunch and get the cinnabomb, you won’t be disappointed. 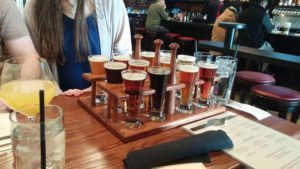 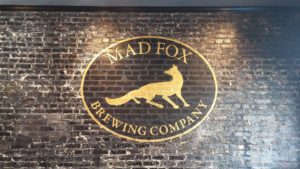 MadFox Brewing Company had an impressive amount of drafts on tap, but the following were our favorites: Festivus Winter Warmer, Diabolik Belgian Strong and the Orange Whip IPA.  While the Winter Warmer and the Belgian Strong were rather season appropriate, the Orange Whip was definitely a summer beverage.  Out of the 3 (4?) IPAs on our flights, this was by far the best one MadFox had and I highly recommend. 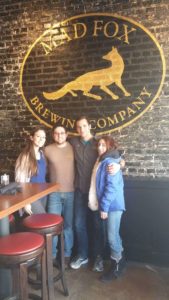 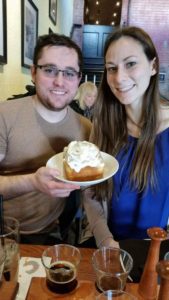 With a strong beer representation, exceptional brunch menu and what can only be described as a foodies sexually charged cinnabon fantasy, it’s hard to dislike Mad Fox Brewing Company.  It receives a solid 4.5 rapid alcoholics out of 5.

Post MadFox food coma we headed to downtown DC, to visit Capitol City Brewing. This is a huge brewpub that was packed on Valentine’s day, but we found seats at the bar and ordered our usual flights.  Unfortunately, this is another one of those breweries that need to cater to a crowd of conventional beer drinkers.  Their offering was the standard IPA, lager, brown, stout, etc.  So needless to say we were slightly disappointed coming from such a strong line up at MadFox.  There was one exception to the standard beers, and that was Batch 3000, a 10.2% barleywine.  We’re a bit biased when it comes to barleywine, and we always tend to give points to those that attempt the feat, but this really was a well built barley wine.  Unlike some barley wines that are in your face booze, or wimped out out 8%, this barley wine had a perfect palate mouth feel with a small, crisp bite of alcohol on the back end letting you know it wasn’t juicy juice.  It was so good in fact, this was the first growler purchase of our trip! Granted it was for Andrew’s boss, who is a huge fan of the brewery. 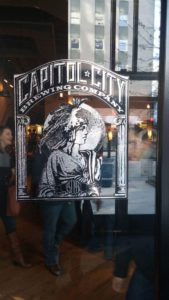 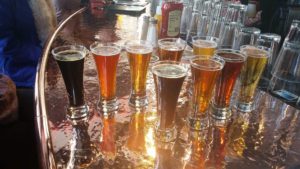 Another brewery, another standard flight.  The saving grace of Capitol City Brewing was clearly it’s impressive food selection (albeit we didn’t eat) and a never ending basket of free, fresh, doughy pretzels (thanks bartenders!).  I wish I had more to say about my boss’s favorite DC brew pub, but I do not.   Capitol City Brewing earns a disappointing 2.25 executive orders out of 5.

Nate and Dani have officially hit their beer limit and have left us. *sad face* So Andrew and I walked over to District Chophouse and Brewery, another brewpub in the heart of D.C. This place looked very upscale and the food smelled good, but we just chilled at the bar and got a huge flight.  Our flight consisted of the standard fare: IPA, brown, stouts, lagers and a red.  The two beers of mention were the Bourbon Stout and the Barley Wine.  Both were well balanced, but neither had any unique characteristics to warrant a follow up visit.  One interesting thing about this brewery is that the downstairs restroom is seemingly only accessible by elevator.  So that was strange. 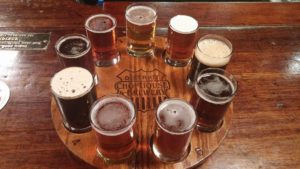 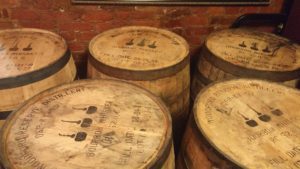 Let’s switch gears really quick and discuss the DC metro.  Even though we’re not true New Yorkers, we’ve become very familiar with the unusual or complex metros through our NYC debaucheries.  I even picked out our hotel due to its proximity to the subway stop.  So it shouldn’t have been a problem to get from Chophouse back to the hotel… Until we discovered what could be DC’s crappiest policy ever.  Every individual requires their own metrocard!!!  You can’t just put the correct fare on the pass for two riders. Lame. But oh well, still have $2.95 left for a future ride.  So let this be a lesson, buy your own metrocard.

Quick stop back at the hotel to grab the car and we were off to visit a brewery in Virginia. Port City Brewing in Alexandria was close but closing soon according to google.  Which brings us to our next Beerventuring tip:  Always check facebook before beerventuring!  Lucky for us, Port City had extended their hours to help singles garner enough liquid courage to speak to each other.  We’re not saying that Cupid was at Port City, or that the shy singles in the establishment found their lifelong partners; but they did manage to dance to all awkwardly dance to  Michael Jackson. 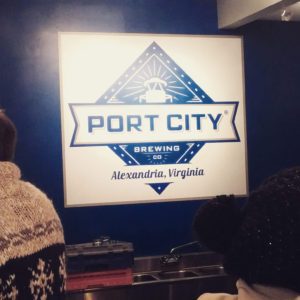 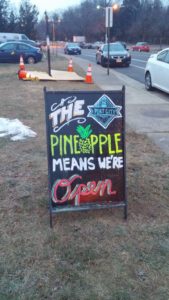 Anyways, the place was bumpin, we found a seat conveniently located next to usb outlets (seriously thank you!) and got samples one at a time; so no flight pictures.  Aside from making a solid lineup of the average beers (wit, ipa, etc.) Port City also offers a wide variety of one offs; at least that’s what Untappd told us on the way to the brewery.  Unfortunately we didn’t get to sample any of the one off brews but we learned that in addition to these one offs, once a year they make a new beer called COLOSSAL.  COLOSSAL is a very different brew year to year to celebrate their anniversary.  Fortunately, for those of us who have missed their previous anniversaries they also brew batches of the old anniversary beers to celebrate!  We arrived just in time to consume their 5th anniversary brew COLOSSAL V (old ale) and we also sampled COLOSSAL I (imp stout).  They were both delicious.  Do we recommend sampling all COLOSSAL beers? If we could have, we would have.  Do we recommend trying all of the other, more generic beers? We sure do as well.  We didn’t have a bad beer, or even an average beer.  Everything from Port City was awesome. 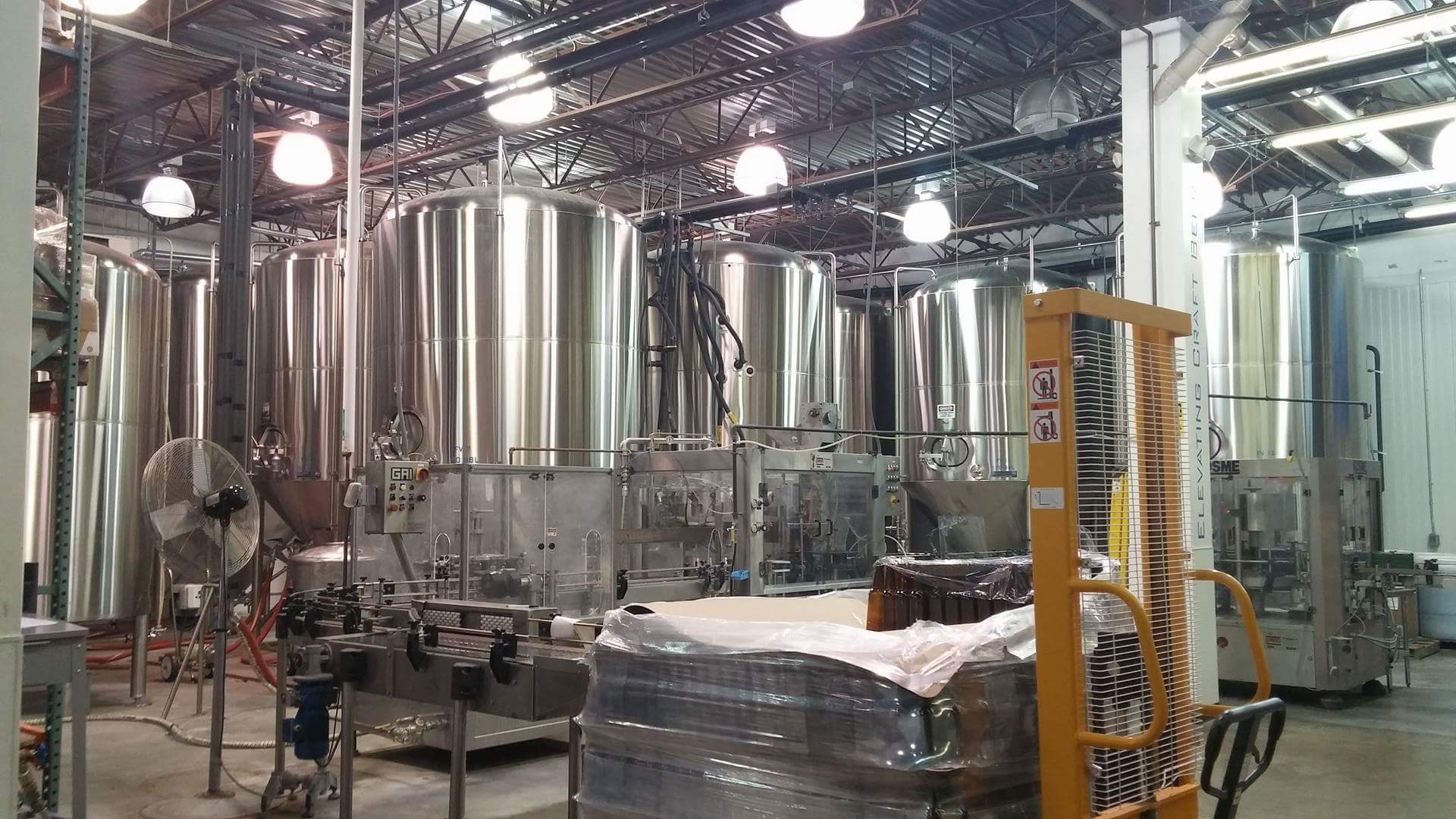 Port City Brewing is a brewery we would be proud to be locals at.  From the knowledgeable bartenders and amazing beer selection to the tipsy, terribly coordinated thriller dancing patrons, there was nothing to dislike about Port City.  With that said, Port City earns a rare, and COLOSSAL 5 out of 5.

Granite City Food & Brewery of Fort Washington, MD is another brewery chain that has 34 locations across 14 states.  This loud, wild bar scene was built on the first floor of what can only be described as a brand new college apartment complex, in the middle of a weird Florida style downtown next to a pier.  It’s an unusual area to say the least. 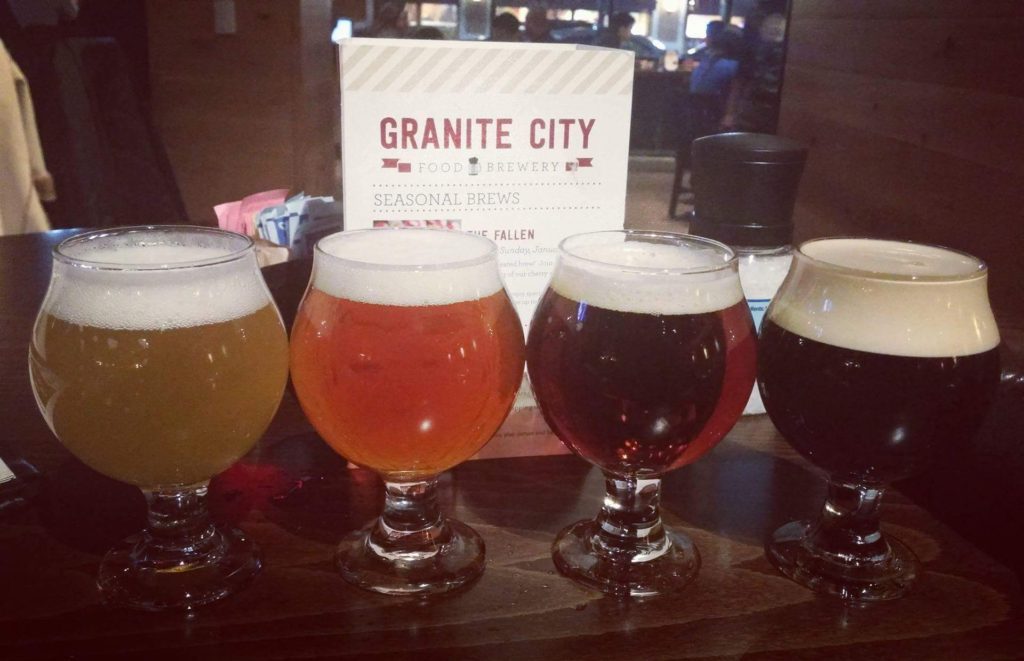 Running on empty, we decide to order a bowl of soup, a dozen wings (mild because anything hotter than that and Melissa will die)  and soft pretzels with cheese sauce.  There was no pizza on the menu, so we had to get our solid carbs in from somewhere.  The food itself was comparable to a local Fridays, but a little more expensive.  We have nothing bad to say about the food but while we ate we noticed an all too familiar scene at these chain brew pubs.  Barely anyone was drinking the beer.  And we kind of understand why.

Like most of those chain breweries before, the same generic beer had been placed before us.  A pale, IPA, lager and stout.  I’m not going to dwell on these because frankly, we’ve had the same flavors before.  The only twist here is a brew style called fermentus interruptus.  It’s a fancy name for saying quality control and not actually brewed on premise.  After watching the video, it seems more complicated than having local brewers onsite, but to each their own.  See the link if you would like to learn more. http://www.gcfb.com/craft-beers/fermentus-interruptus/

There were two seasonal beers on draft that were substantially better than the basic offering.  The Fallen Cherry Stout and Prairie Vixen hefeweizen.  The cherry stout wasn’t overly amazing but it was a stout and did taste of cherries.  The hefe was a standard hefeweizen, but we have a soft spot for them so they’re always an enjoyable drink when we get to enjoy them.

Granite City has all the charm of a nightclub, and the food of a chain, and the beer of a regular bar.  Similar to Capitol City and District Chophouse, this brewery is not for beer enthusiasts or snobs.  The Saturday night patrons understood this and we did not.  Granite City earns a disappointing 2 (really tasty) wings out of 5.

The last brewery of the night was a 90’s throwback called Hops Restaurant of Alexandria, VA.  We’re just going to be real honest, the beer was average and the place was in need of a huge face lift.  On the history section of their website, they did have an impressive chain at one point and then were bought out by a restaurant holding company which appears to have driven a once thriving company into the ground.  Whatever series of unfortunate events have plagued the restaurant’s management has clearly taken a toll on the entire establishment. 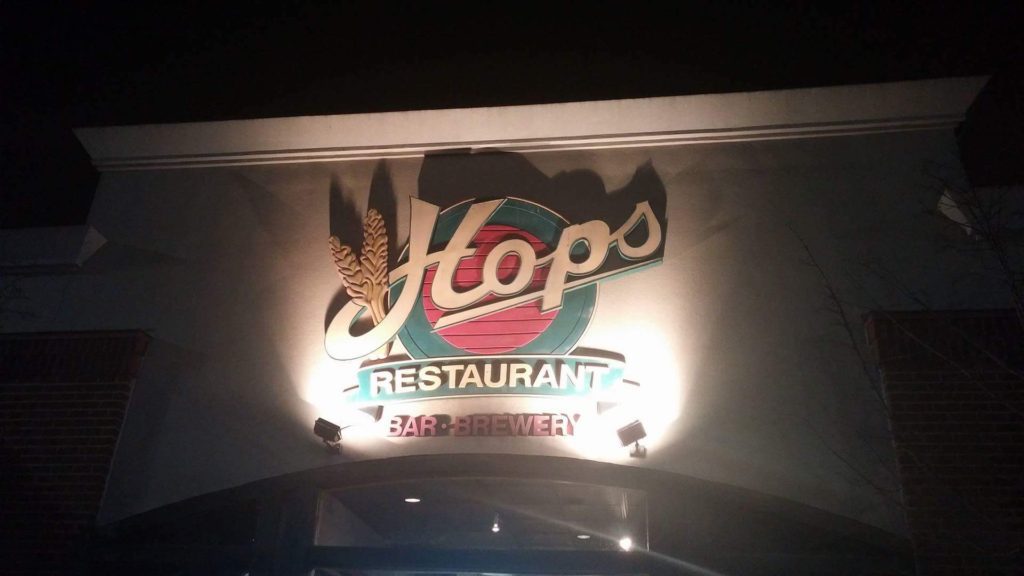 Hops is in a sad state of affairs and I hope it gets new management soon so the brewpub can prosper once more.  Until that happens, we’re going to take an unusual position in our rating system by abstaining.
And thus ends our Saturday night.

Thanks for reading and don’t forget to tip your bartenders.