It’s about 8am and the car is now stocked with water, munchies, Kale, and gas. So Melissa, Kale and I headed off to Richmond for an action packed adventure. We figure we had 8 must hit breweries, and 4 maybes. Either way it was going to be a close call depending on lines, closing times and traffic. Melissa, our Chief of Navigation was confident that we would at least make 8 and potentially one more if time allowed. For anyone looking to take a beercation, Richmond is absolutely packed with beer that cannot be seen or drank in one day. In hindsight, we did not give this area enough time so we highly recommend at least a 3-day weekend if possible.

**Important Note: Get the FREE Richmond Beer Passport at any participating brewery for FREE swag.**

Every now and again you run into a regional brewery that’s so large you might mistake it for a macro. Stone Brewing is one such brewery that bubbles on the cusp of what’s considered craft by snob and beerventure standards. A lot of snobs will flick their thumb at Stone, saying its dissolved into everything they hate about beer but its these same people that will not ever admit the fact that Stone became what every Tree House, Trillium and Other Half want to become; a success story.

I’m not going to spend a lot of time on Stone; we’ve all had the beer. So here’s what we had in house:

Double Bastard Vertical Flight: 2013, 2015, 2016. Being huge fans of vertical flights, this was super appreciated. You can really taste the difference between the strong ales as they age. The 2013 was certainly sweeter than its counterparts, and the 15 was the most potent by far in a flavor comparison.

Barrel-aged Saison with Blackberry is a wild ale that wasn’t over sour, and quite difficult to dislike even if you’re pallet isn’t sour focused. The blackberry flavor was present, but didn’t show up enough to out-pace the flavors of the barrels it soaked in; really its only downside.

Stone is the 3,000 pound gargoyle in the corner that still represents the craft industry to the best of its ability. If you genuinely have a gripe against the size of Stone, no amount of text will convince you to visit the fantastic east coast arm; which like Green Flash, is super well designed and an amazing experience worth your time. We give Stone an Arrogant 4.5 out of 5. 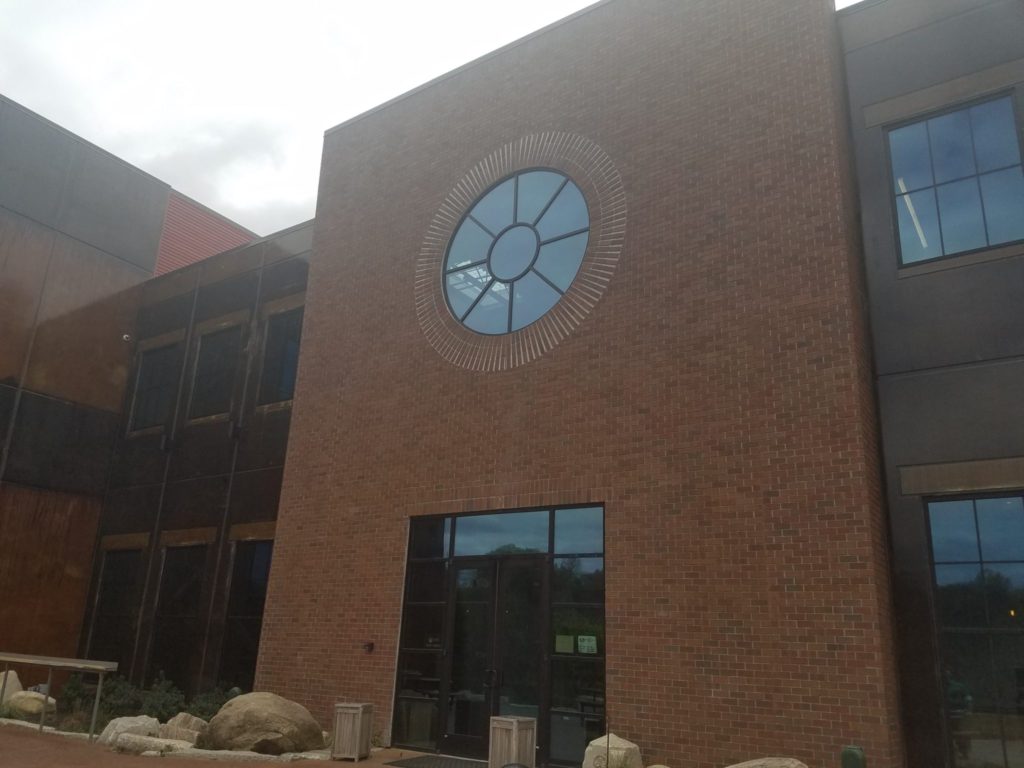 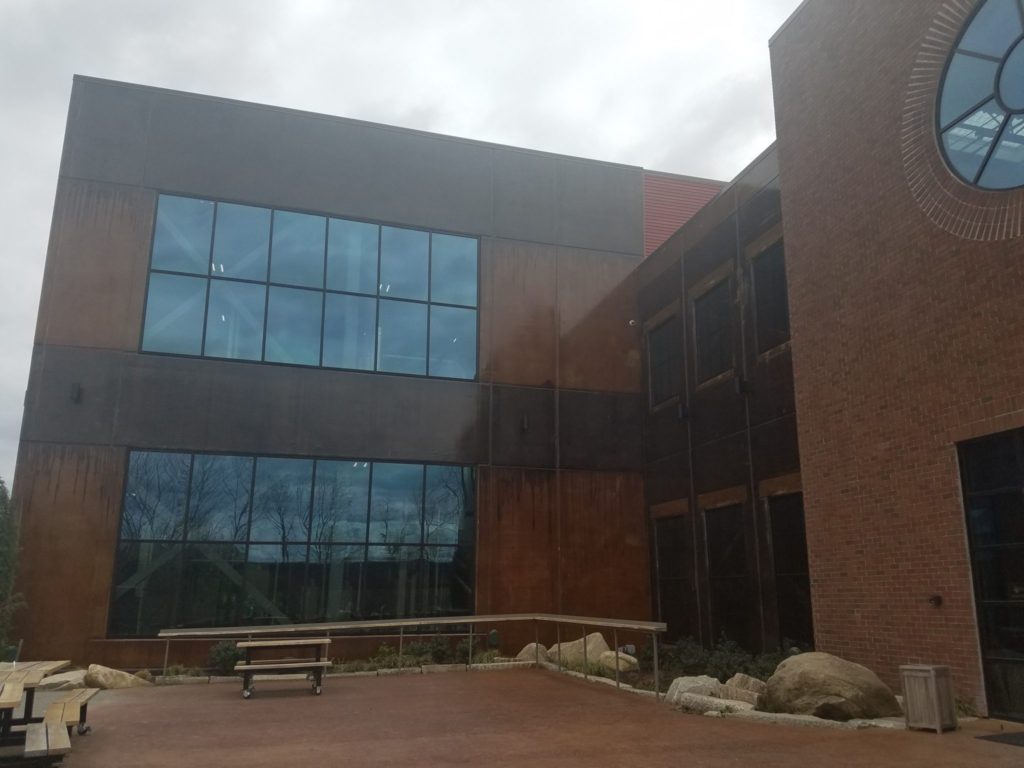 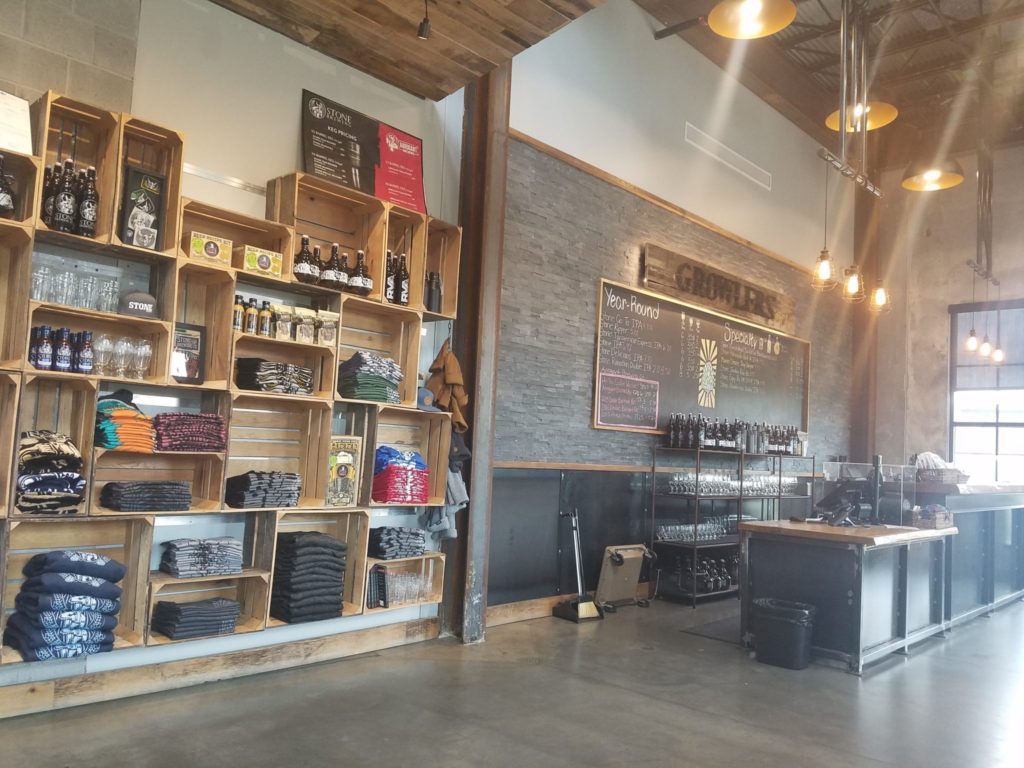 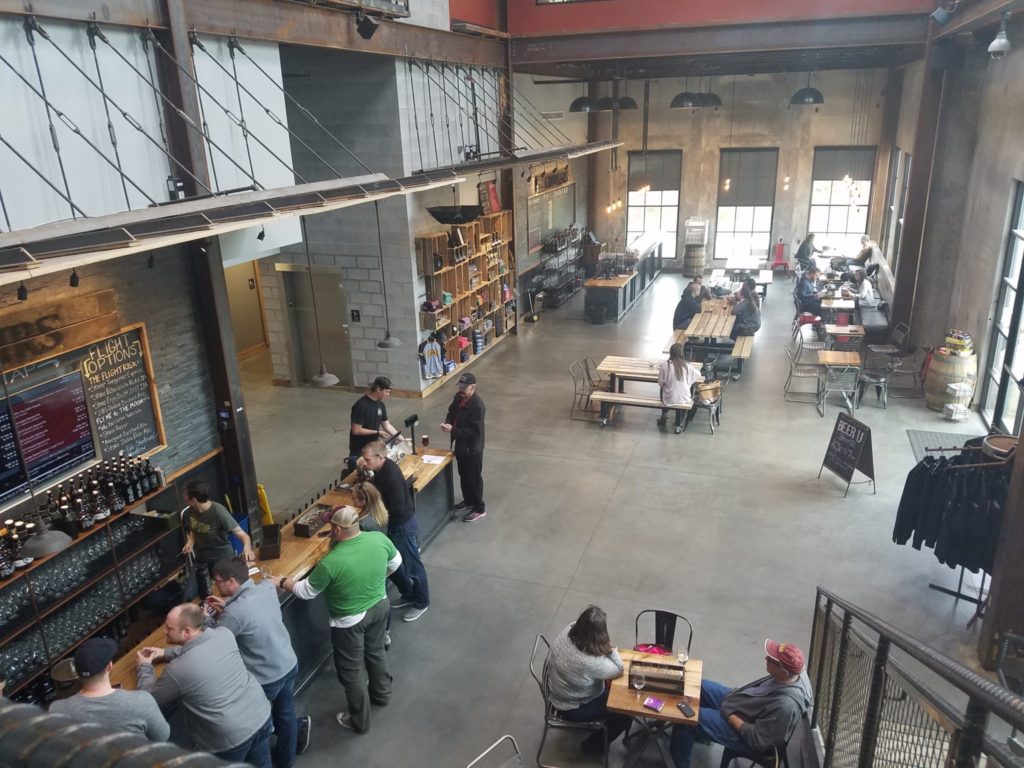 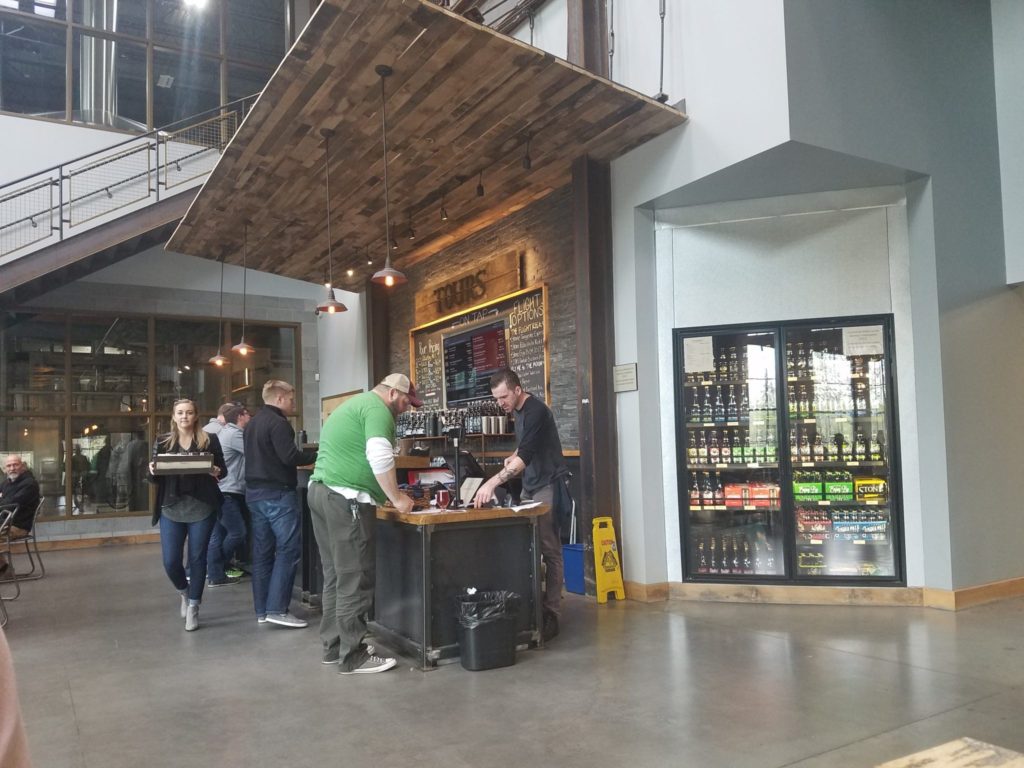 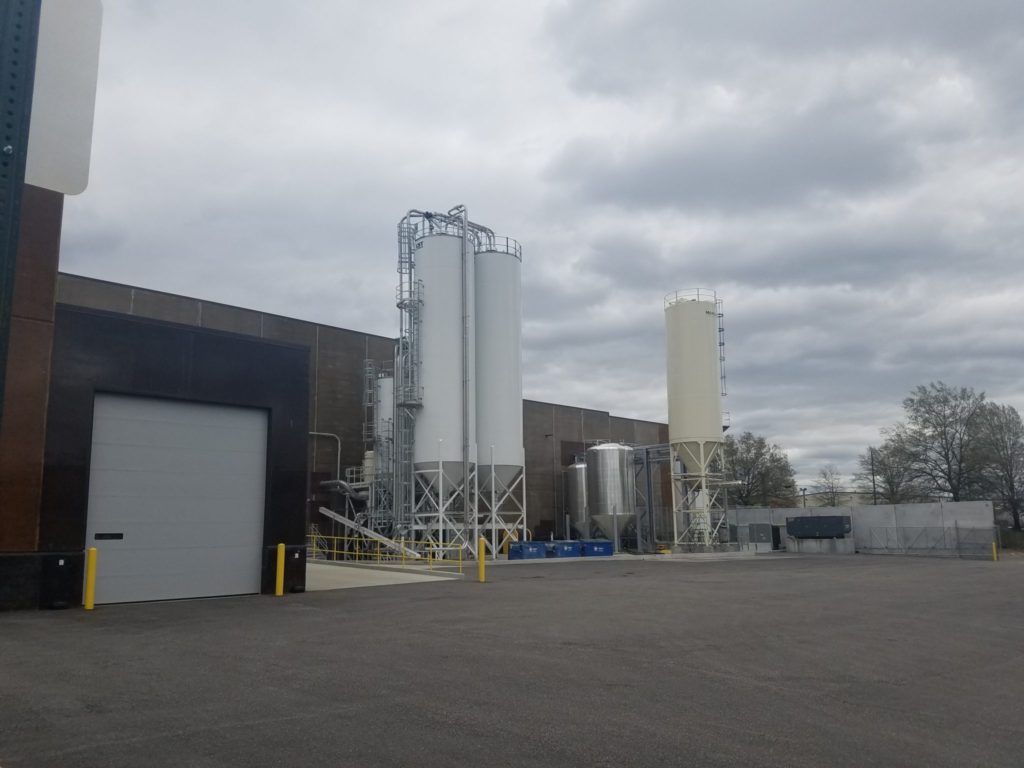 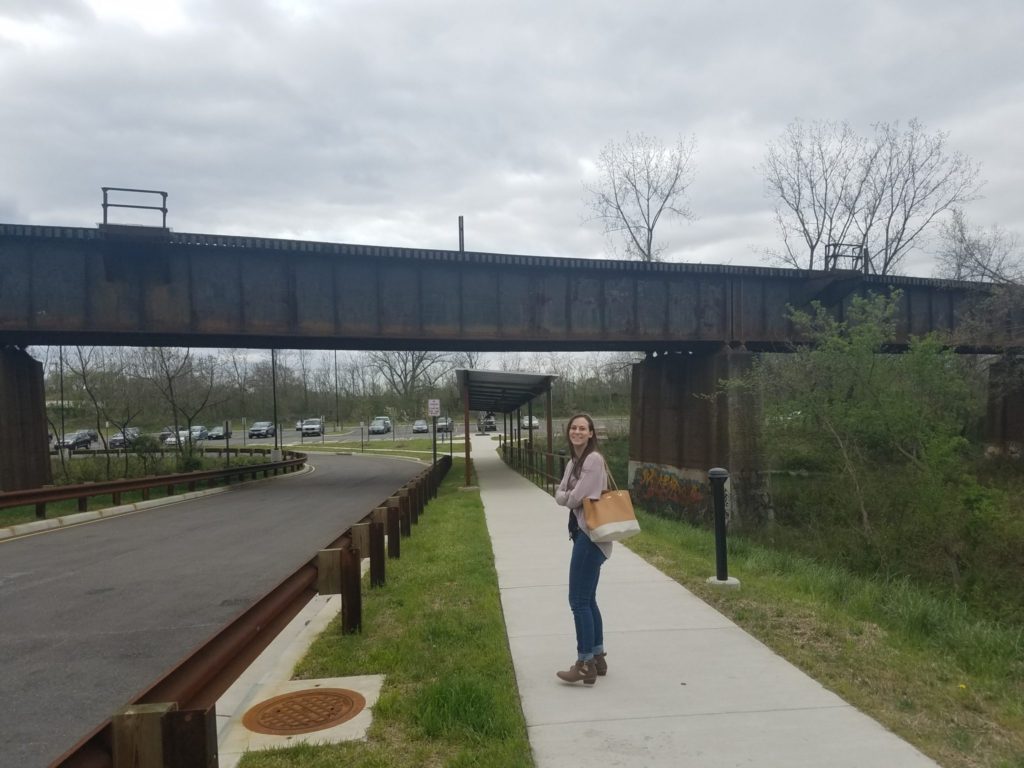 Housed in a large old factory, Triple Crossing of Richmond, VA almost didn’t make our cut for places to stop today. We didn’t know a whole lot about it, but its proximity to Stone and its early opening got us in the door. And it was worth the stop.

The large open space has several high top tables, coin operated arcade games, refrigerators stocked full of Clever Girl IPA (dwindling fast) and a brick oven pizza kitchen. So we ordered a flight, some pies and I quickly went over to the can line to get a few 4 packs of Clever Girl while it was still available.

Our flight consisted of Clever Girl IPA (2 different hop variants), Falcon Smash IPA, Fulton Rising DIPA, Oat Pale Ale, OTC Pilsner, Waxing Poetic with Mango and grapefruit, and Paranoid Aledroid wheat ale. A lot of this flight, even though it was good, failed to stand out with the exception of the basic Clever Girl, Waxing poetic and the surprisingly exceptional OTC Pils. In our opinion, the regular Clever Girl had a much more intricate flavor than the overly complex, and pallet wrecking variant which was dry hopped with Citra + Mosaic.

Waxing Poetic Berliner Weisse was immediately claimed by Melissa but in the few sips I could sneak from her glass I noted an extreme blend of mango and grapefruit flavors. The flavor burst was an extreme wow factor for me since many “fruit” sours just become sour without any distinct profile other than mouthwatering, face puckering, warhead. On the other side of the beer spectrum, OTC Pills deserves an honorable mention for bringing beer back to the basics. Much like the beers from Weeping Radish, you will not find anything truly extraordinary in this classic Czech pilsner but you can taste the wholesome ingredients and well-manicured craft that went into this underappreciated style. Frankly, it was my second favorite beer on this flight.

On top of a flight of good beer, three of which being exceptional by my standards, were two delicious piping hot pies delivered to our table from the brick oven in the tap room. Even if you’re not hungry, get the pizza. You won’t be sorry. Also swing by the back room and play a few old arcade games; yes they’re quarter operated. Just like the good ol’ days.

Triple Crossing of Richmond, VA is conveniently located only a few minutes away from Stone and it certainly deserves your attention. We didn’t look either direction while triple crossing and were hit by 4 out of 5 cars. 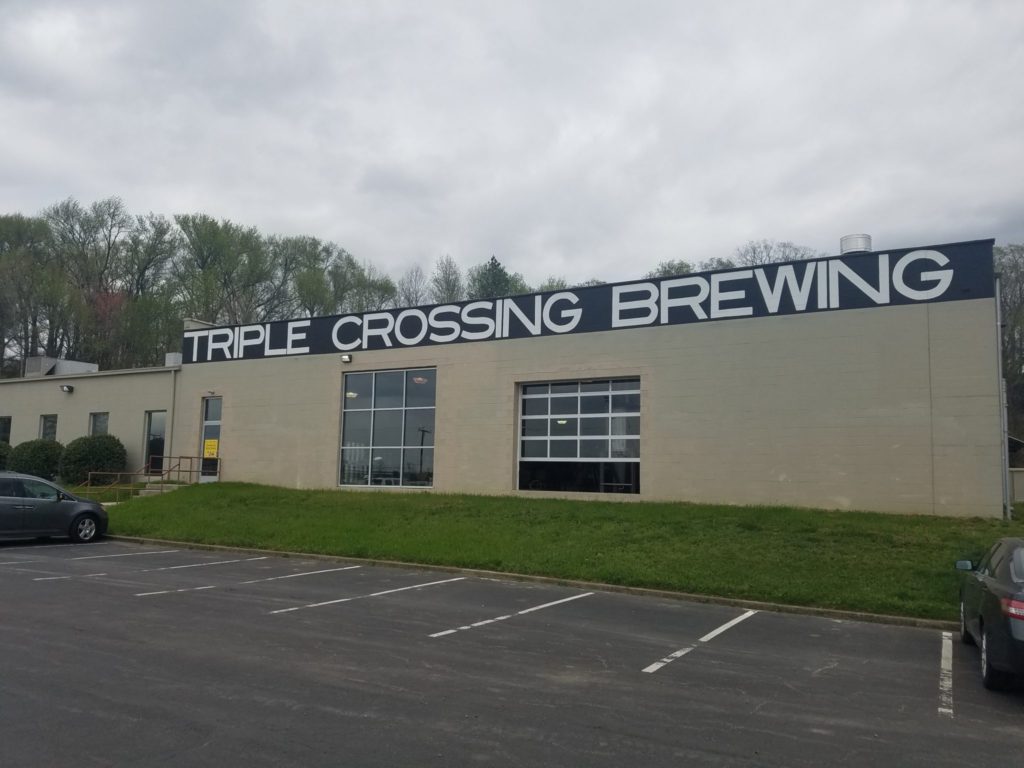 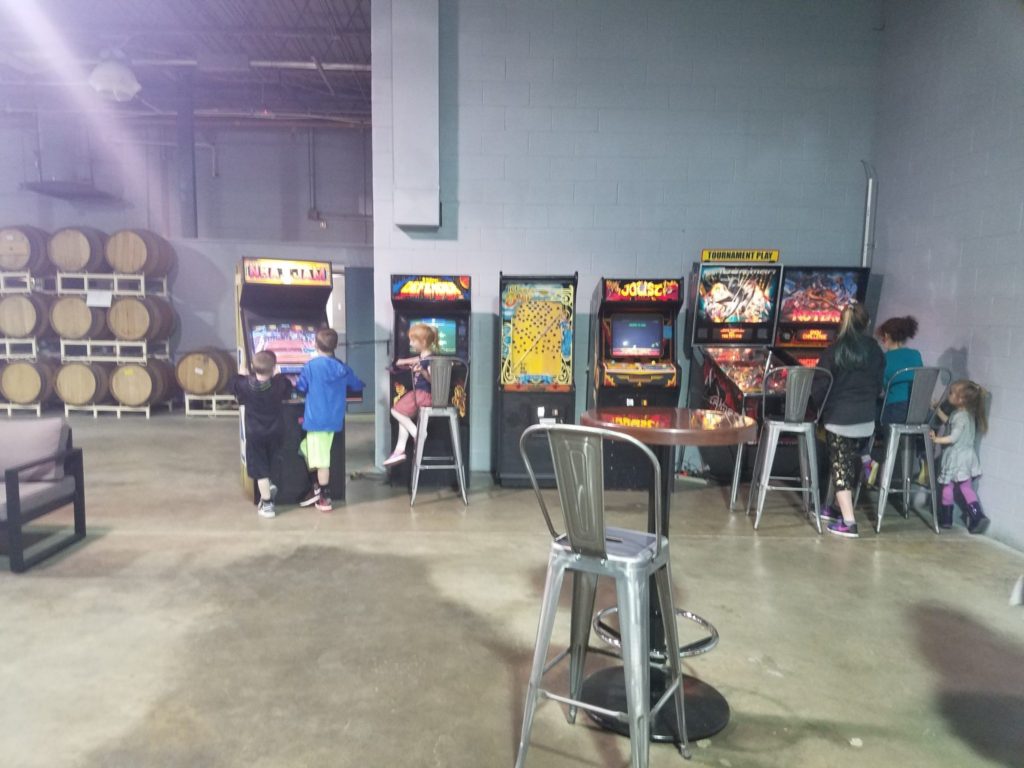 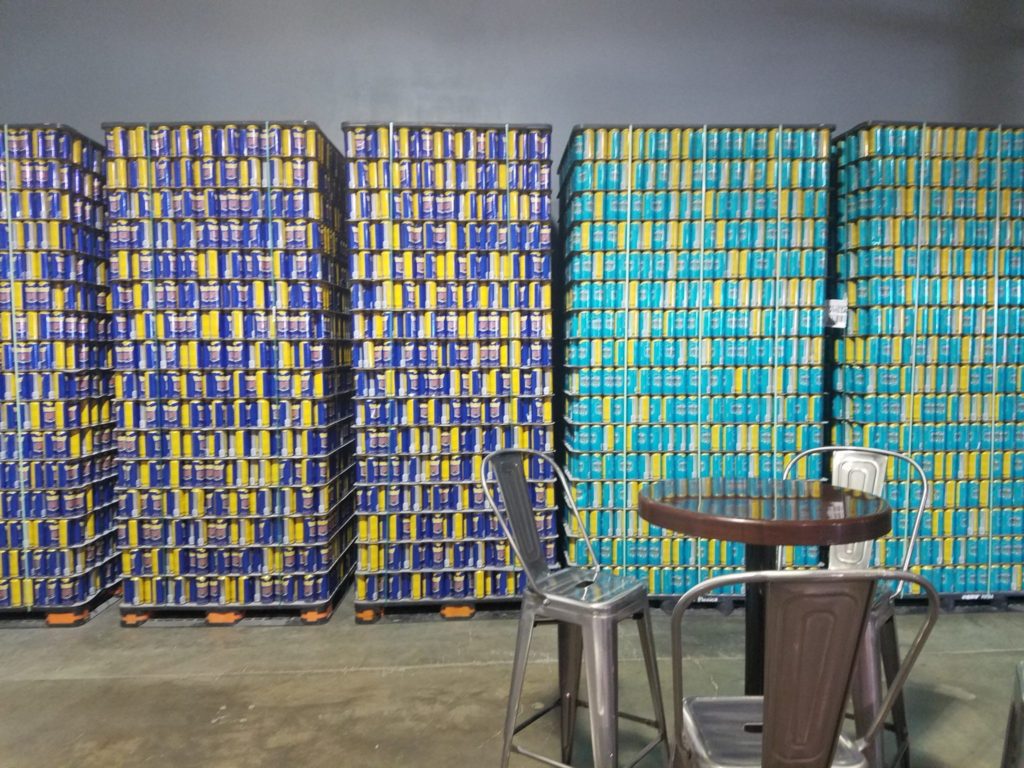 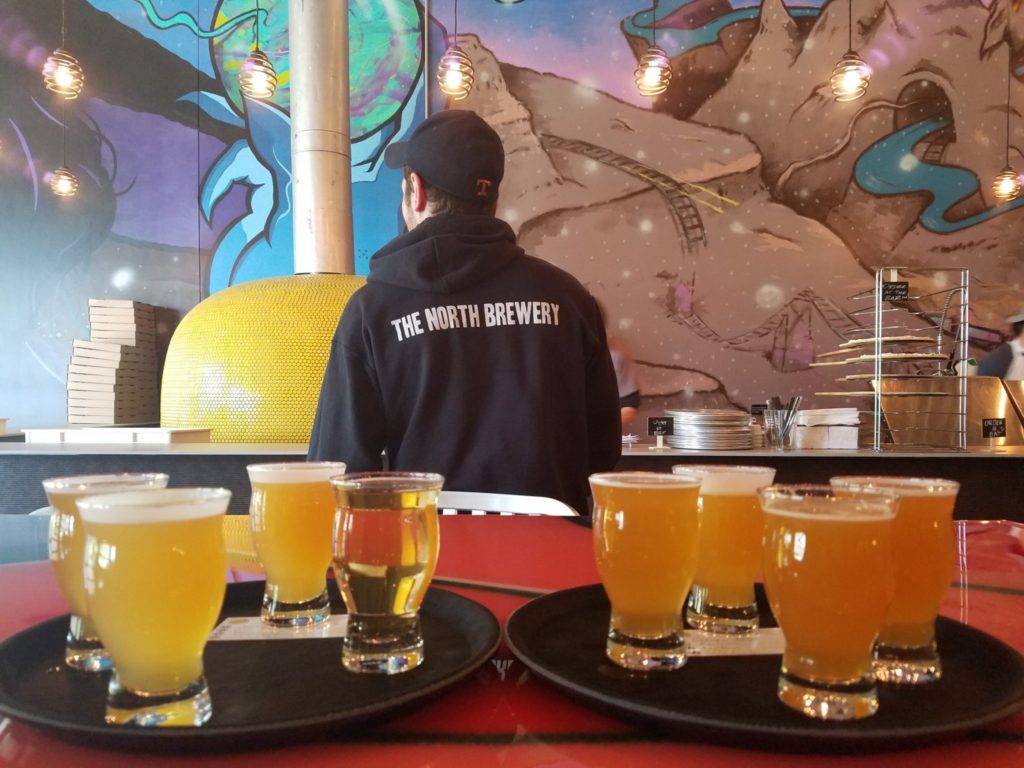 In the back of a funny U-Shaped building with some tight parking is the Richmond location Three Notch’d Brewing Company. There are two more locations; one in Harrisburg VA and the other in Charlottesville VA. But this location is rather special, as it’s the collaboration house which engages not only breweries but various community outreach groups, philanthropies and restaurants. It is a rather cool business venture and is certainly unique.

Our flight consisted of 5: Heros PrevALE Cream Ale, 40 Mile IPA, Jack’s Java Expresso Stout, Whize Guys IPA and There will be Braggot. When I consume cream ale, I always stack it against my personal favorite; Genny cream. For whatever reason it’s always been a beer that I loved since high school college. Heros didn’t really do it for me, nor did 40 Mile. Jacks is where we get interesting though.

Jacks Java Espresso Stout used a blended, cold brewed roast from across the street and produced this wonderful, chocolate stout which had the perfect amount of sweet. Whize Guys IPA was a brew made in collaboration with a Richmond based clothing company and had a hearty quantity of cas and centennial hops and a heavy malt body. There will be Braggot was a collab with the Black Heath Meadery (Richmond, VA) and easily made the list for its uniqueness. Braggots are mead beers and in this case it was 45% honey. The unique part was the Belgian yeast used to ferment the beer giving it a distinct farmy, tart and floral flavor.

Unfortunately, it seems like most of these beers at the Collab house are one offs so chances are you will never experience the Whize Guys or the Braggot in quite the embodiment that we did. Other than the beer there is a large patio area, darts, games and local art to provide top notch entertainment. Notch’d Brewing earns a should hit 3.75 out of 5 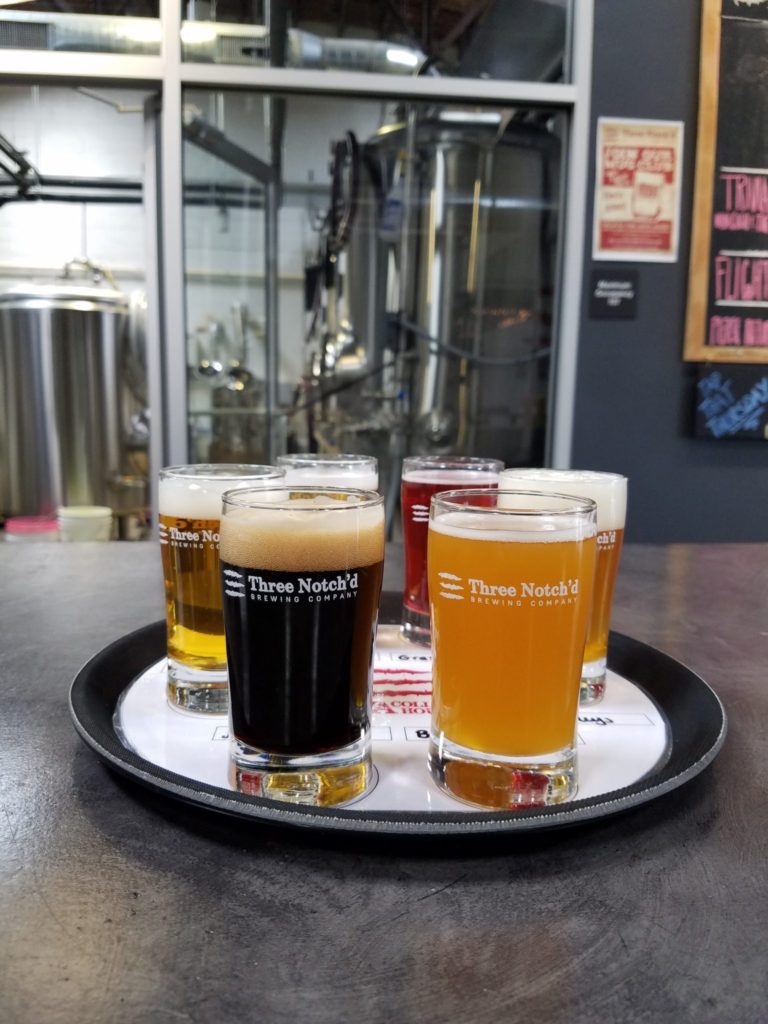