After checking out Orlando and Tampa, we decided to get an early start and see what St. Pete Beach had to offer.  Mostly just sand, gulf water and sun.  Needless to say I was over it already, but Melissa loves the beach so I put up with it for two hours while slowly working on my sunburn while she turned a nice tan color.  Doesn’t matter what SPF I use, or how often I apply it, I will get burned and I will be in pain for the rest of the trip.  Luckily there was always beer to numb the pain.

St. Pete has become rather trendy these past few years according to Florida Beer locals we’ve met thus far on our trip be it in person or through Instagram. So we decided to spend our first two nights on the beach, about 15 minutes from the downtown and about 30 minutes from Tampa.  Turns out there are a boatload of breweries on the St. Pete Pensula; like 15+. Crazy right? So we took advice from the locals and mapped out our course over breakfast which consisted of fresh fruit and fig bars on the beach.

The most common recommendation we received from our crowd sourced information sessions was Green Bench Brewing Company.  This massive indoor, outdoor facility had several delicious sounding beers on draft as well as several meads and ciders from its subsidiary meadery.  Being this was our first brewery of the day, and the extreme selection of beer, mead and cider, we decided to indulge a little bit and grabbed two flights of four.

Our favorites of the flights were The Northerner, Raspberry Brut, Tiki Tack and Sunshine City.  The rest of the flight was average, and a few of them we noted as “too watery.”  But the four described below all received a 4+ rating by us on Untappd; so there is plenty of room to find something you’re looking for.

The Northerner is a “cyser” which is a mead made with apples, and this particular one was then fermented over cherries.  It had a light body but certainly did not have a watered down taste.  The cherry flavor came through nicely, and it wasn’t overly tart but rather refreshing.  The Raspberry Brut is their farmhouse cider aged on fresh raspberries in wine barrels.  Bruts are also called Biere de Champagne, and are fun hybrids that range all over the place in flavor, variety and abvs.  This was Melissas favorite of the flight.

Tiki Tack is a hearty passionfruit and guava gose brewed in collaboration with Brewski of Sweden.  I used the word hearty because this gose was rather syrupy; really more so than we’ve ever had in a gose.  We’re guessing it’s where all the delicious guava flavor came from.  Last was Sunshine City IPA.  The classic Mosaic, Citra combination was clearly present in this high citrus flavor profile.  It was so enjoyable that even Melissa enjoyed the brew.

In addition to great beers, ciders and meads, this place looks like it’s home to some wild nights.  There is a large fire pit, spacious patio with green space and an outdoor projector setup in the heart of the downtown area.  Needless to say, Green Bench could be visited during the day, but I can only imagine how awesome this place would be at night.  Green Bench is a must stop 4.5 out of 5. 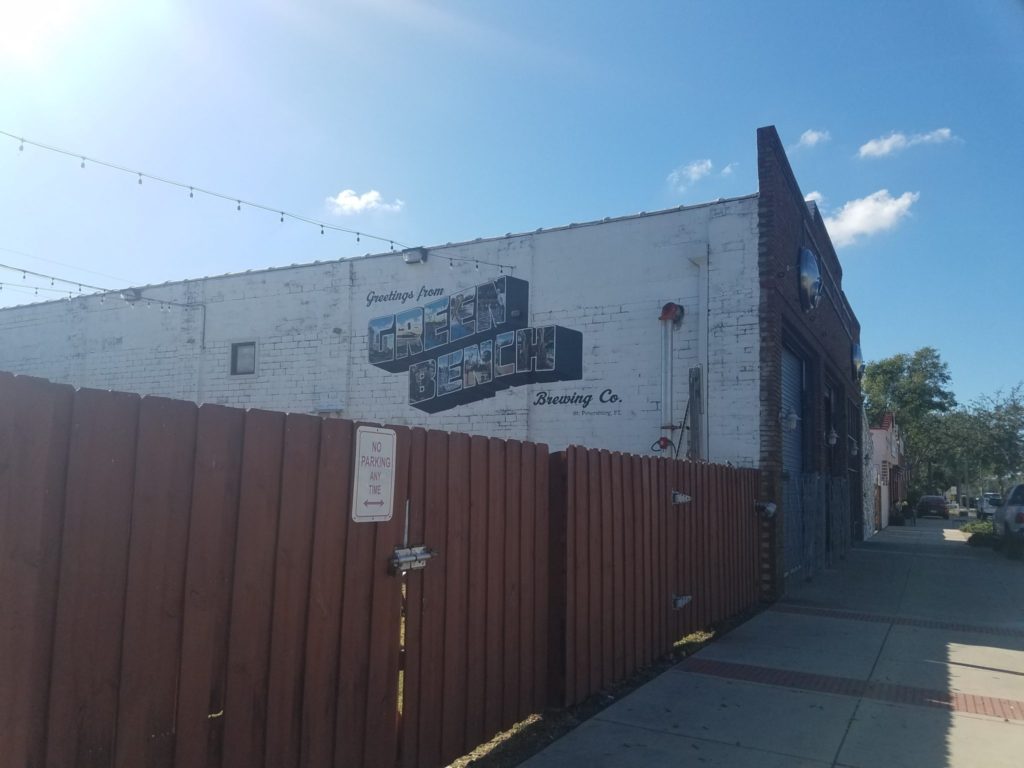 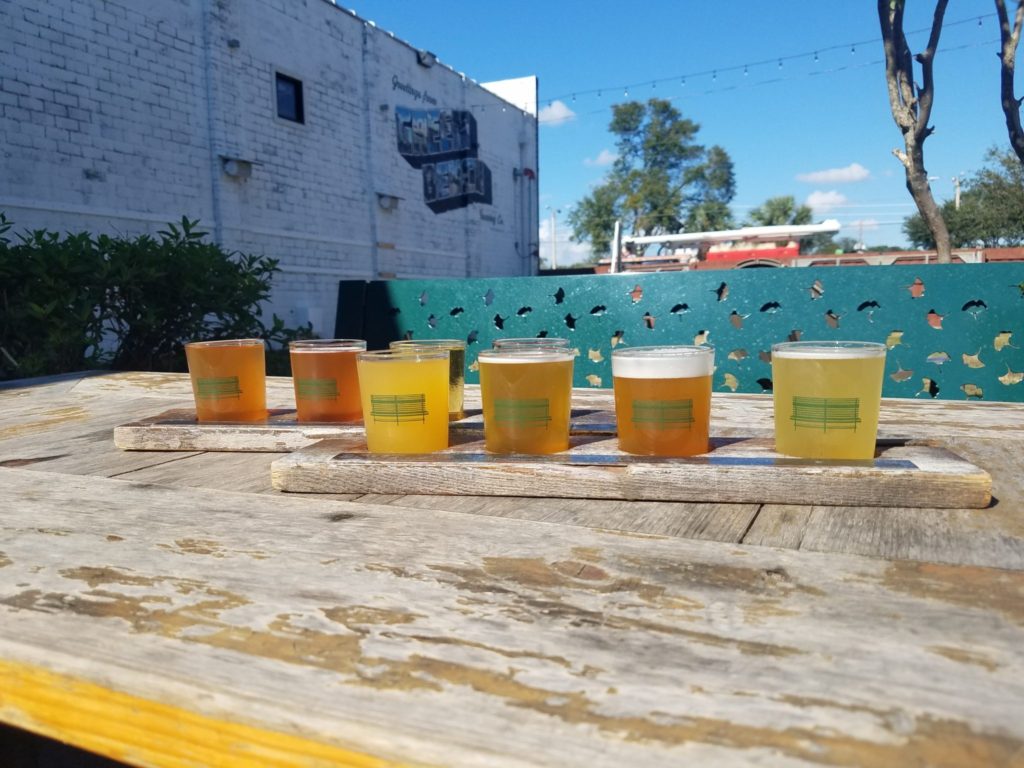 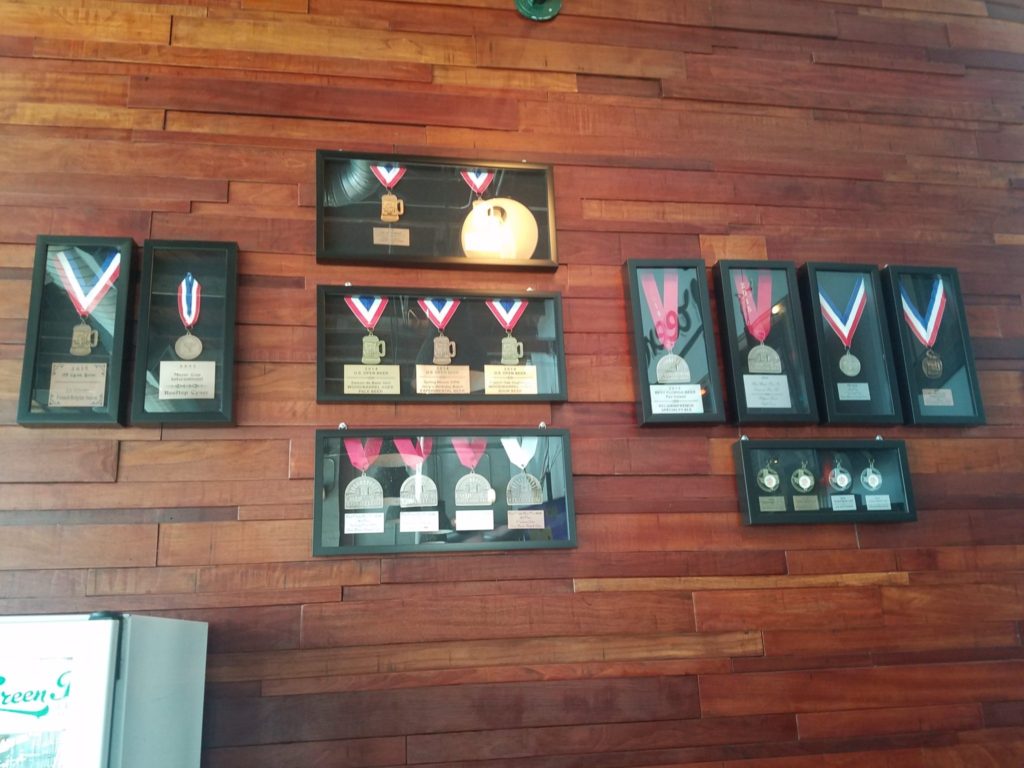 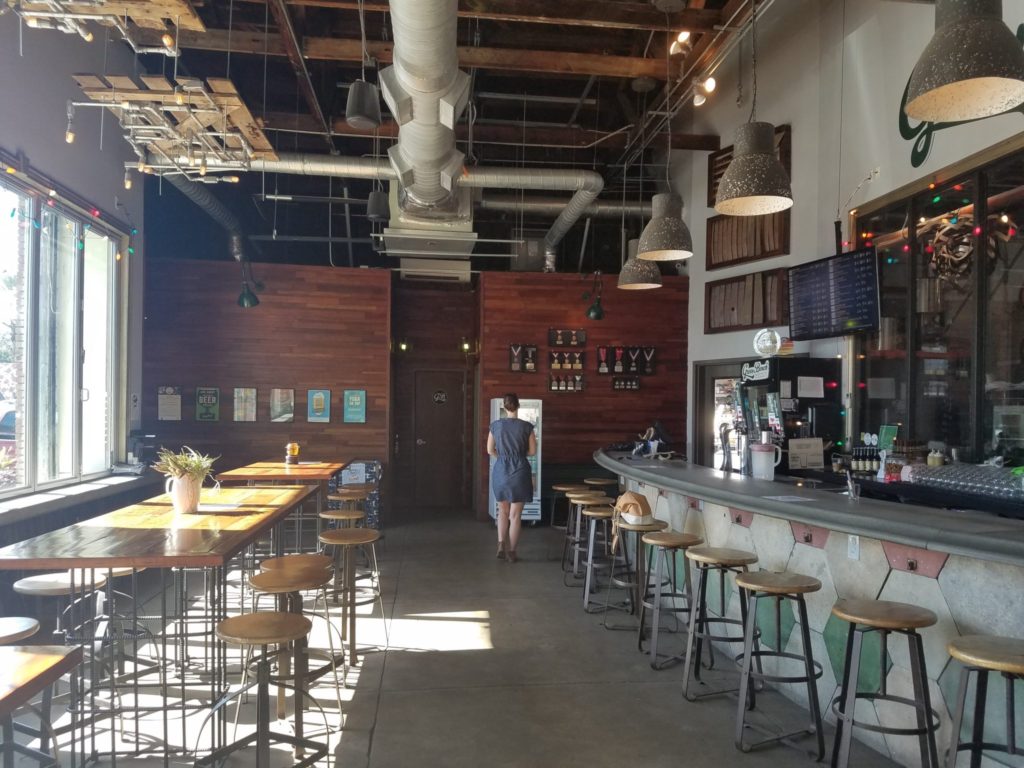 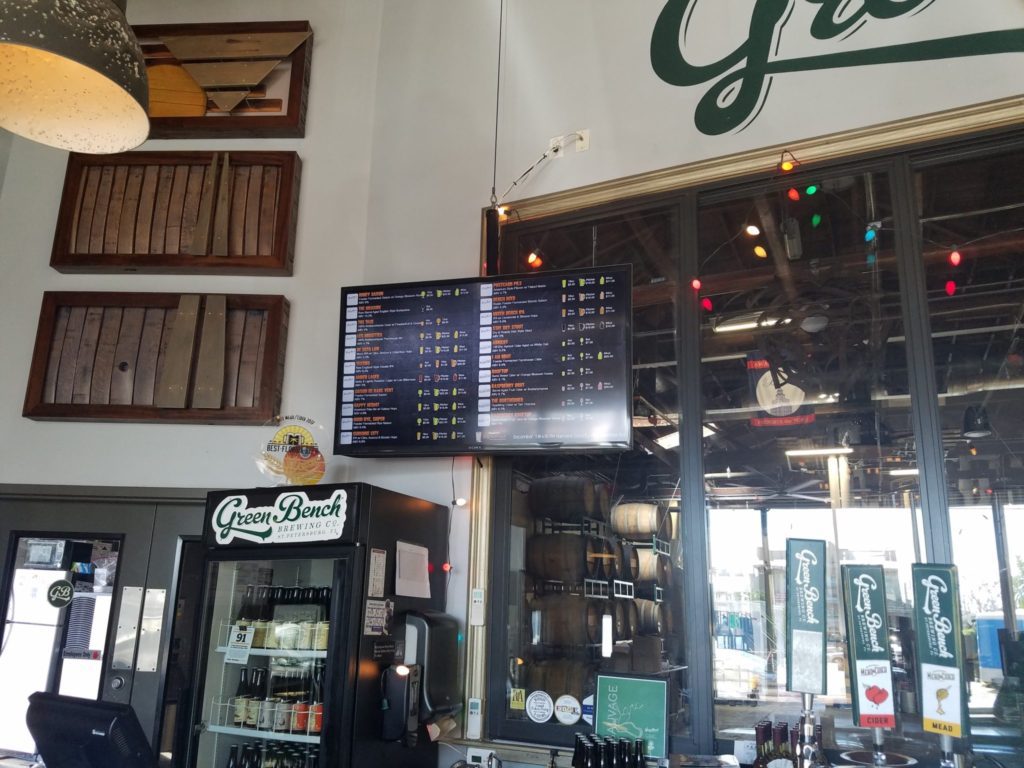 This is where we noticed something that neither of us had really paid attention to: Christmas in Florida is weird when you’re from the north.  No snow, 80 degree weather, shorts and t-shirts.  St. Pete was all decked out for Christmas, and we’re not freezing our asses off. Just a weird side note.

St. Pete was next to open on our list that morning and we were impressed by the large flight of 10 sitting next to us. But we already indulged at Green Bench, so we went with the less awesome flight of 5. 🙁  In order from least to most favorite we had “Put me in, Kolsch”, Milo’s IPA, “Hang in There” Pale ale, Drop Dead Pumpkin beer and Grateful Stout.  We’re going to gloss over Put me in, Kolsch and Milo as they were just average beers.  Hang in There was slightly above average in our opinion.  It wasn’t too bitter, or too malty and did a good job at just being a beer.  Nothing to write home about, but certainly worth a fridge growler for company.

Drop Dead was our first Florida pumpkin beer; which makes sense because we’re out of the season.  Most pumpkin beers taste like a damn latte because they’re overdone in the spice department; and I’m happy to report this is not one of them.  While people like Melissa enjoy pumpkin spice everything in ungodly gobs, I prefer the much more subtle tones of cinnamon and nutmeg so St. Pete hit this right on the head.  Looking at the Untappd score, you can see the extreme variance of opinion on the use of spices in beer.  Last up was the Grateful Stout. Naturally, this was named after the headbrewers love of everything Grateful Dead. Classic symptom of being a deadhead.  The beer itself was more dry than we had anticipated, but had a fair amount of roast and coffee notes.  We needed a stout (and I needed some coffee) to break up our morning flights, and this did the trick so we were rather enjoyed it.

The selection we had at St. Pete Brewing isn’t going to wow any beerventurer or snob, but we can certainly understand that we are not their target market.  St. Pete makes average beer for the craft world, but the price point is just unbeatable.  We noted that this was our cheapest flight on the trip and the cost benefit certainly tips in the customers favor.  St. Pete earns a 3.25 out of 5.  If you have some time to kill, this is a good place to warm up before Cycle Brewing opens

We just packed up and left.

No, not the brewery. We liked St. Pete! We struck up a conversation with a couple at the end of the bar that recently moved to St. Pete from New Hampshire.  One day they just packed up everything they could and drove down here without any jobs lined up.  In the meantime they’re crashing in their friends spare room.  What makes this story even more interesting is that the guy is a brewer and he’s hoping to get a new job in the St. Pete area; perhaps Florida is the new Vermont?  This is something that Melissa and I couldn’t fathom; starting from scratch with no prospects.  But hell, if I had to do it all over again, St. Pete doesn’t look half-bad at all. 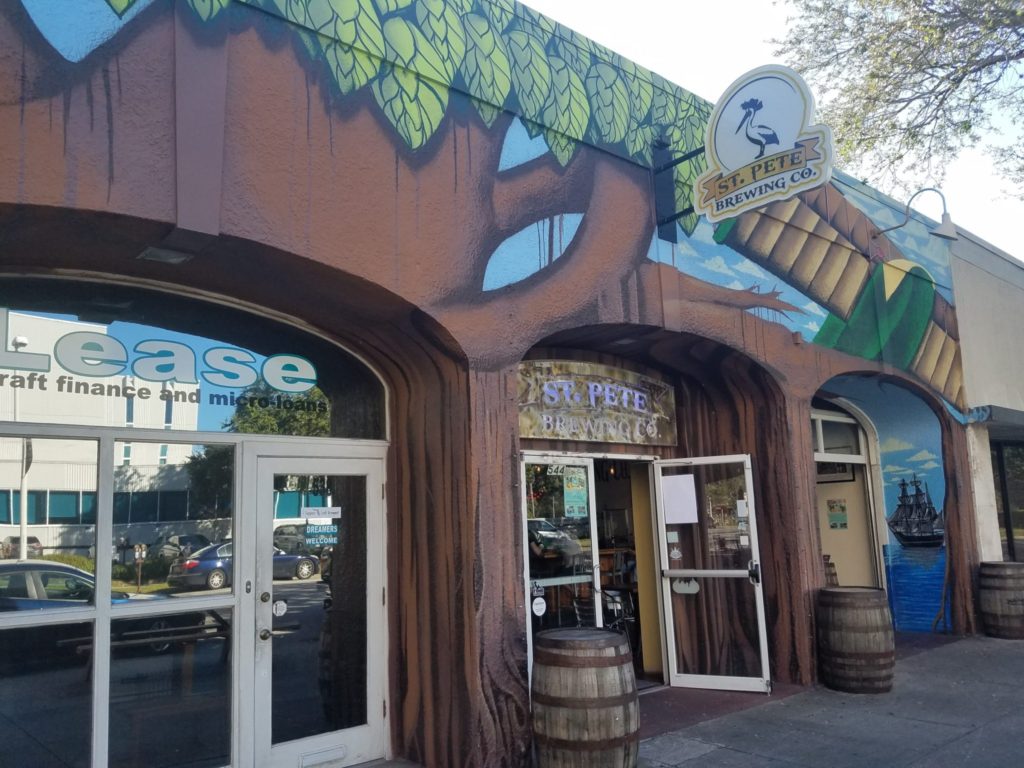 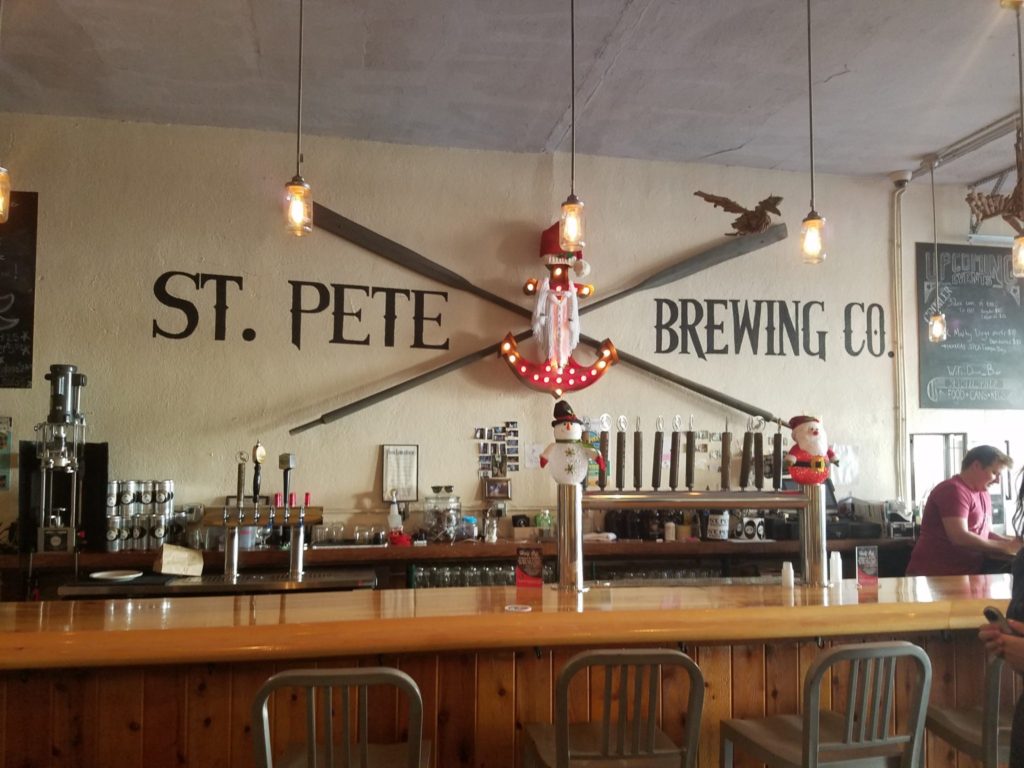 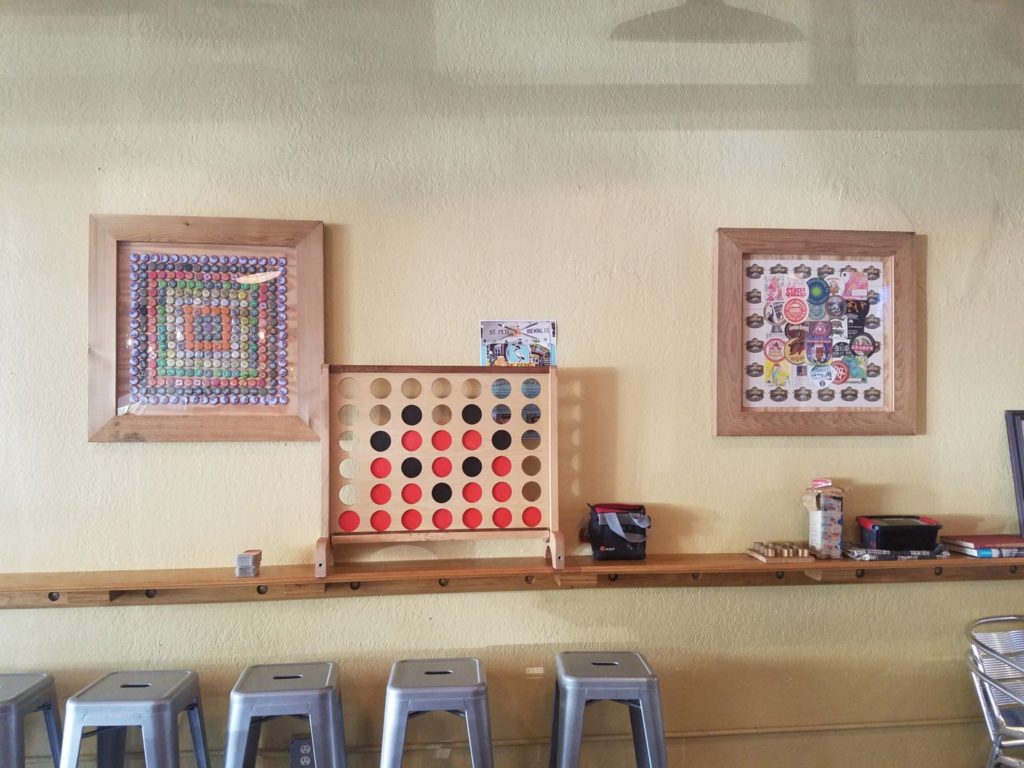 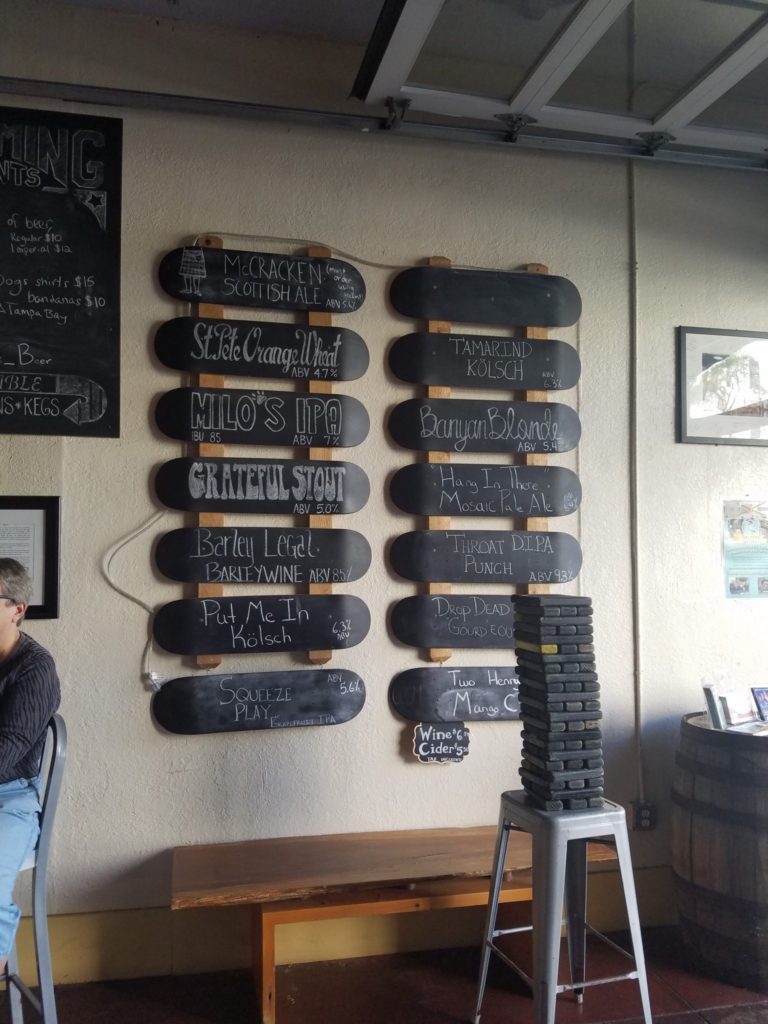 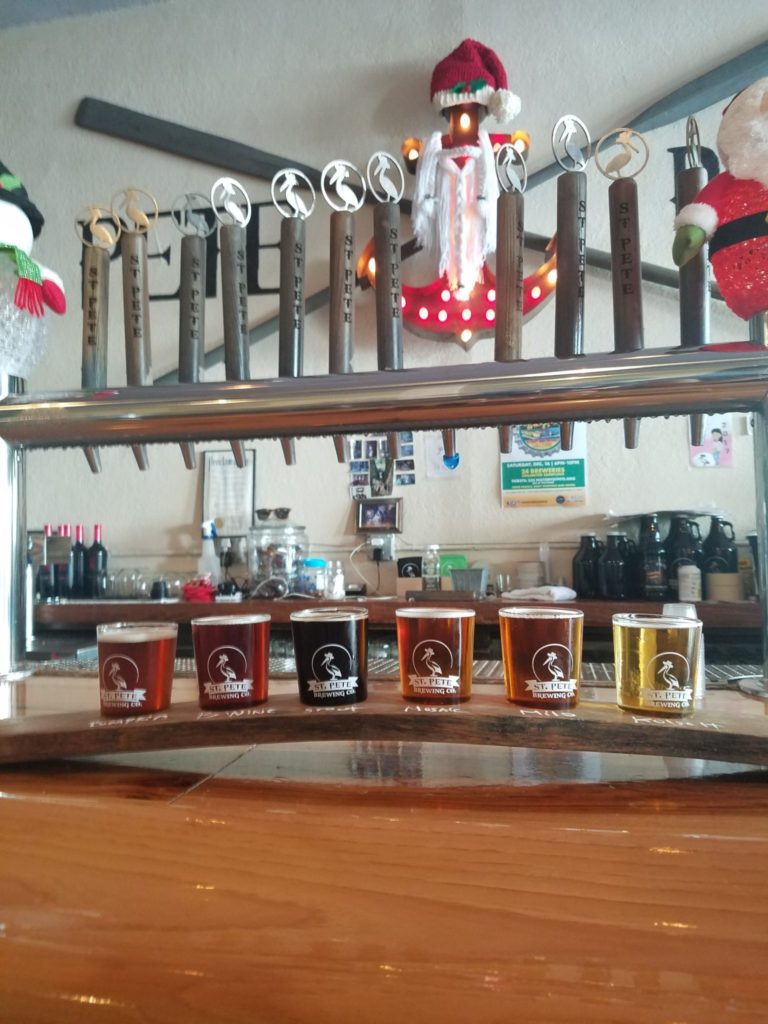 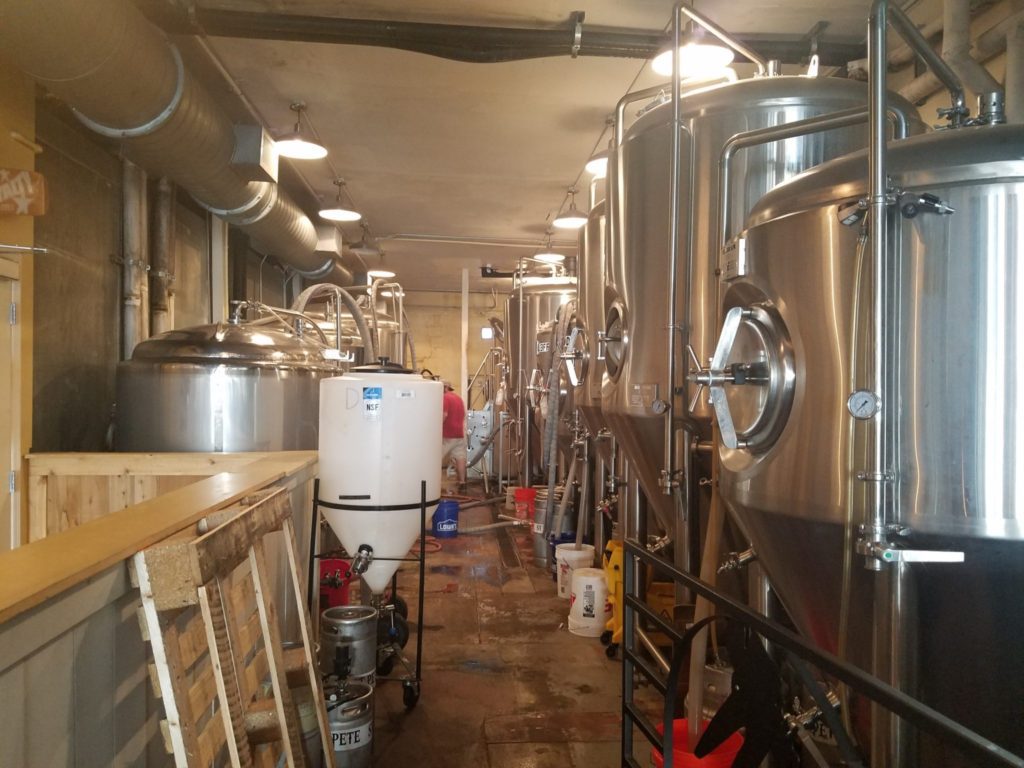 Like Green Bench, Cycle Brewing was also on our list of highly recommended stops by various Florida natives.  Conveniently located just down the street and around the block from St. Pete Brewing, you will find this limited seating brewery serves up some interesting beer, at an extreme price and not in flights.

Enough complaining, let’s get to the beer.  From least to most favorite we had Lall Lall’s Gone Fishing, Electric Boots, Crank and Salty Boots.  Lall Lall was an average IPA, a really well built IPA with a laco finish, but nothing that was outstandish.  Crank on the other hand was “more Florida-y.” it had a much more tropical, citrus flavor profile and a nose that was outstanding.

Electric Boots is a 3.2% Berliner Weisse that was overall, a very good representation of a Berliner.  Really the only thing that would have made this better would have been a dash of Woodruff, or maybe some tangerines.  And queue Salty Boots.  This 2.6% Berliner Weisse was a flawless beer and I do not mean say that lightly.  The batch was extremely fresh, the nose was tangerine, the flavor was tangerine and the tart wasn’t overburdensome on the tongue.  The brewer also threw in some sea salt for a tangerine margarita style brew.  This was easily our favorite beer at Cycle and certainly a top 5 of the trip.

Cycle Brewing is a bit pretentious though.  Between the sort-of-rude bartender that didn’t like interacting with the only two customers in the house, and the extremely high pricing of their pours and bottless; I certainly would not consider this a locals watering hole.  So, snobs rejoice. I highly recommend this for your next bottle share.  Beerventurers, certainly do not skip this one because they make some of the best brews we had in Florida.  The only disappointing thing was really the price point; everything was just damn expensive but we certainly can see that there were no corners cut in quality.  I will let you decide if the bottle prices are worth it but in the meantime, Cycle Brewing earns a 4.5 copyright logo issues out of 5.  Which is sad, because as an avid cyclist I love the logo 🙁 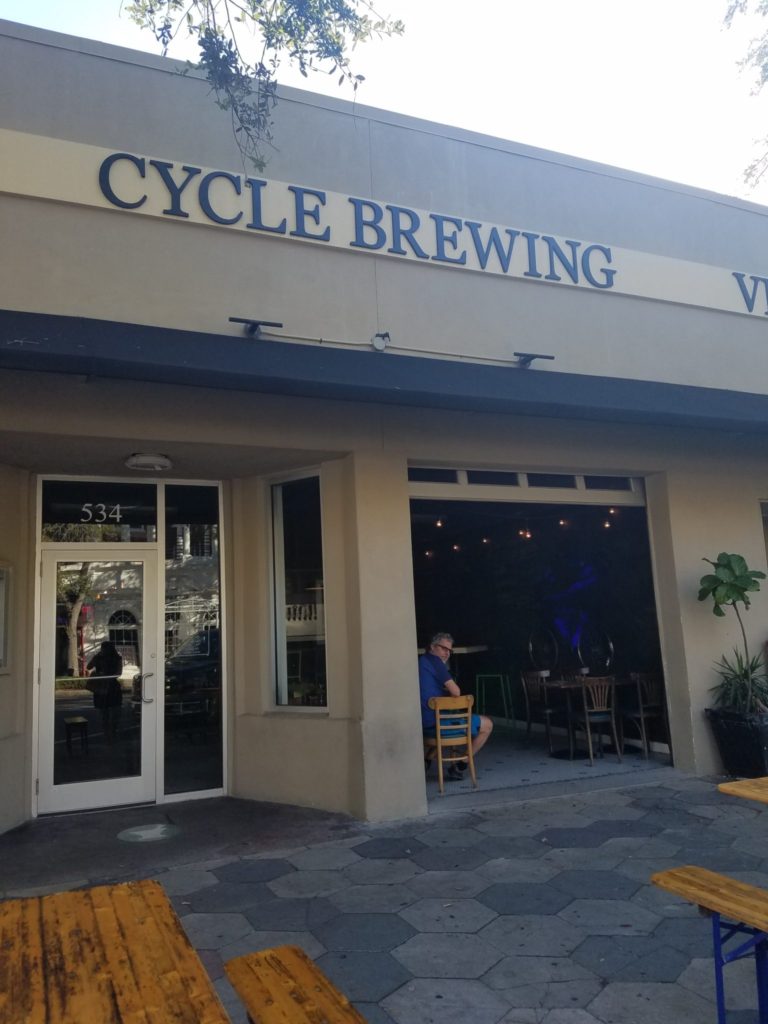 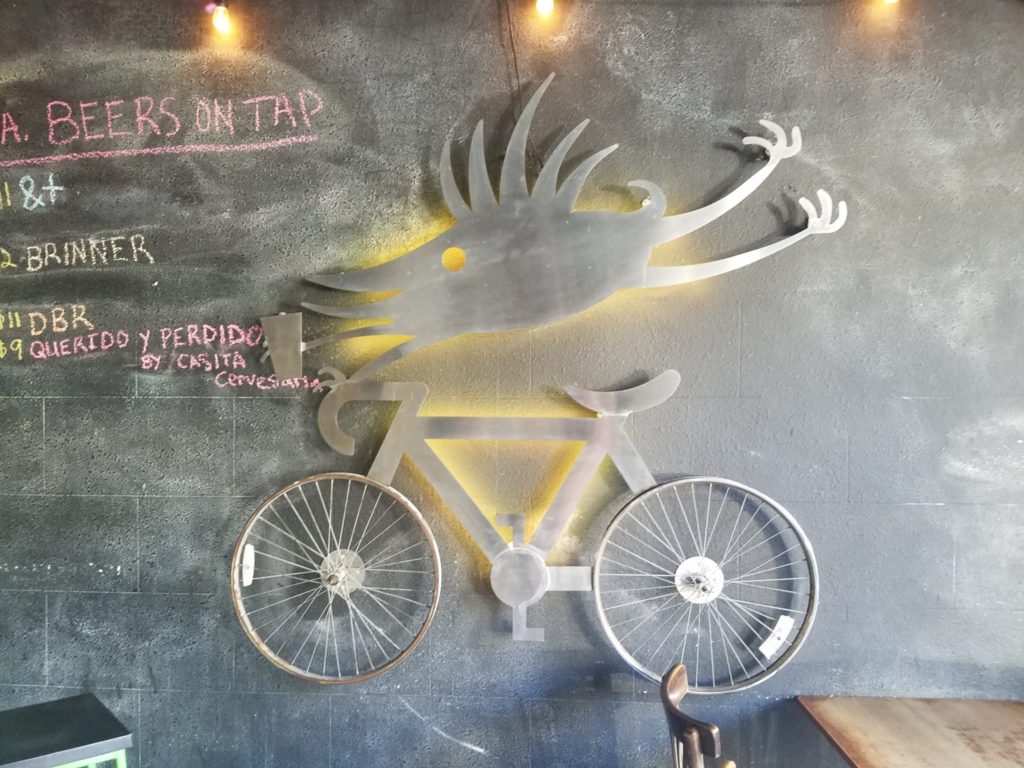 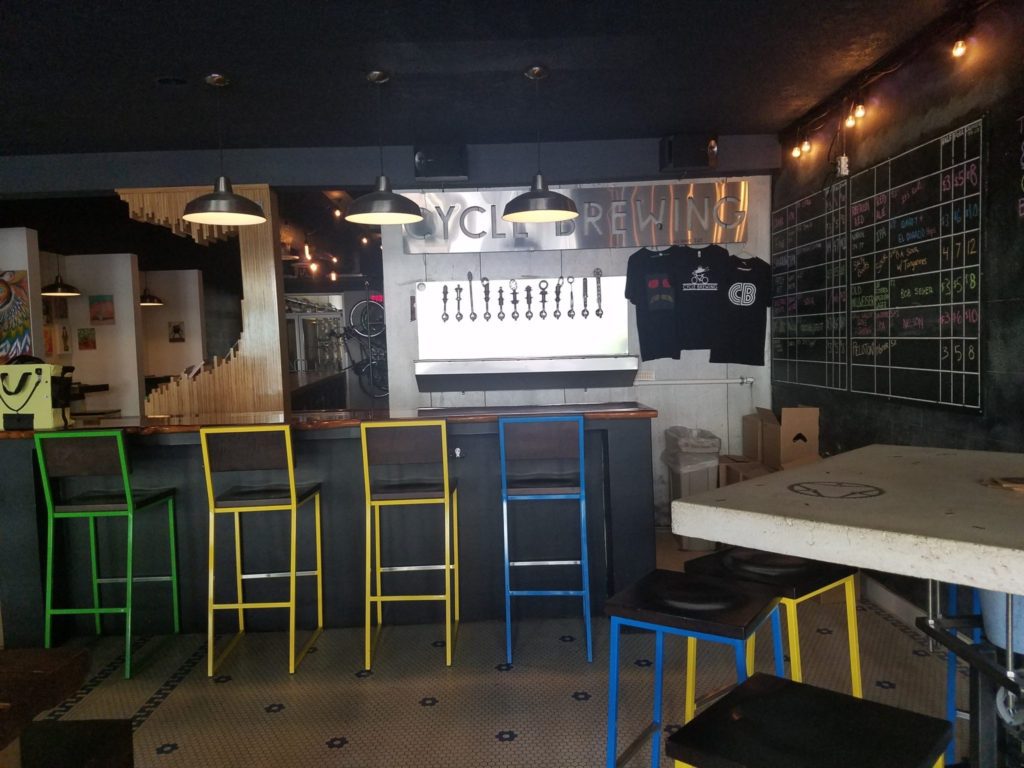 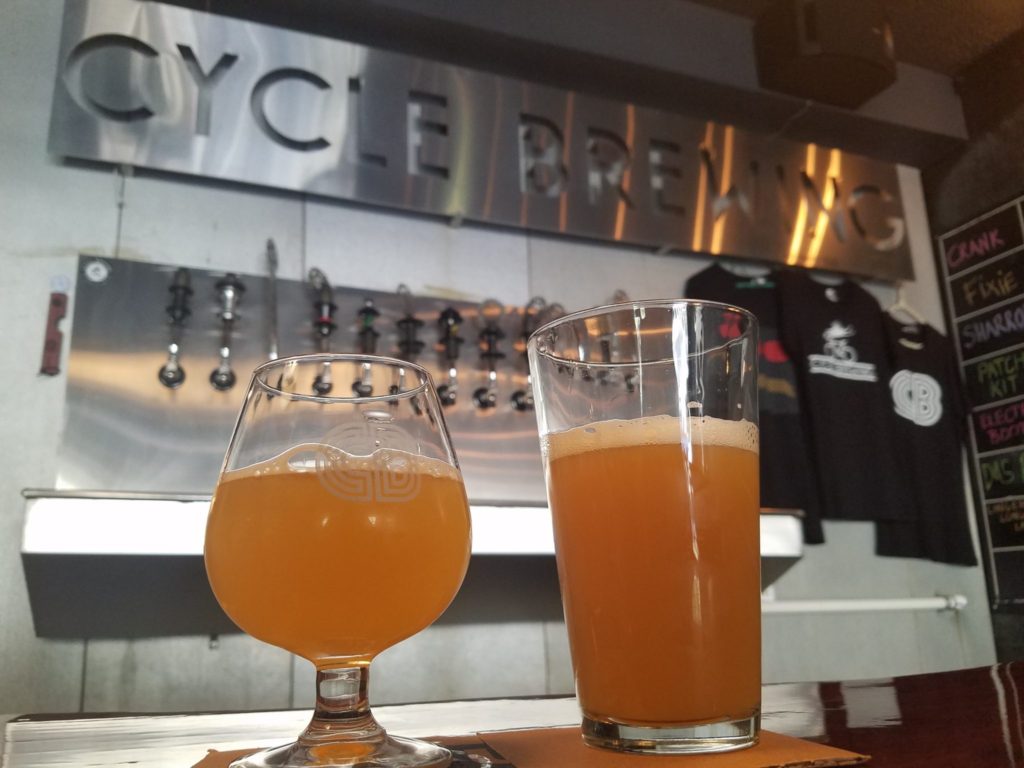 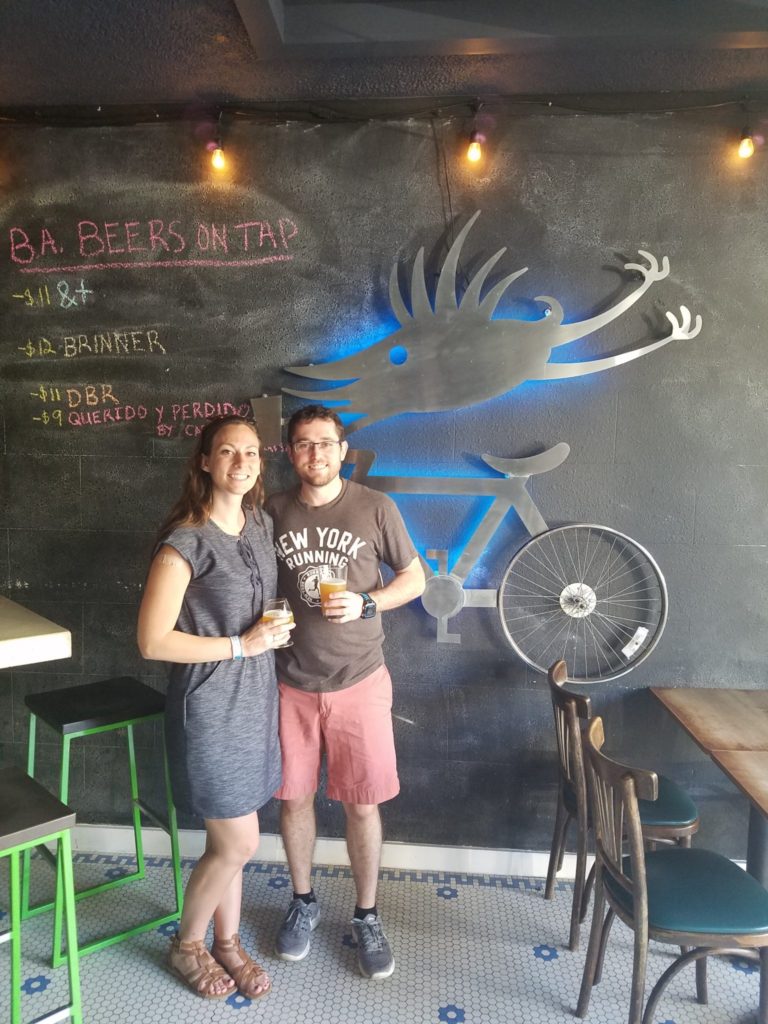 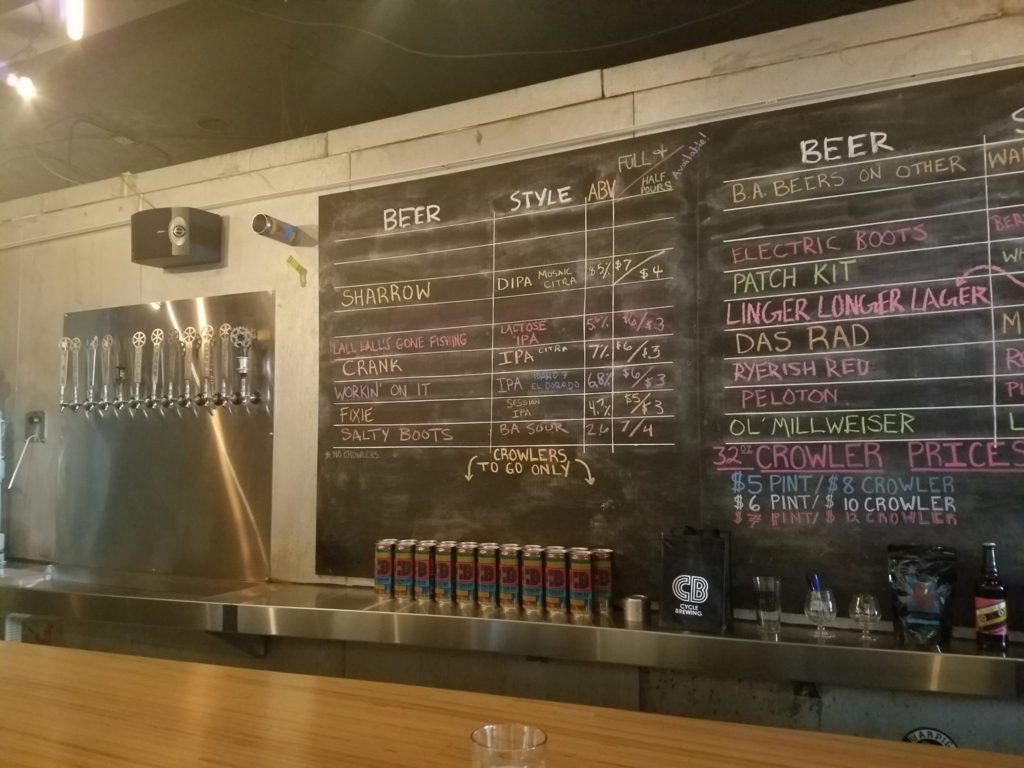 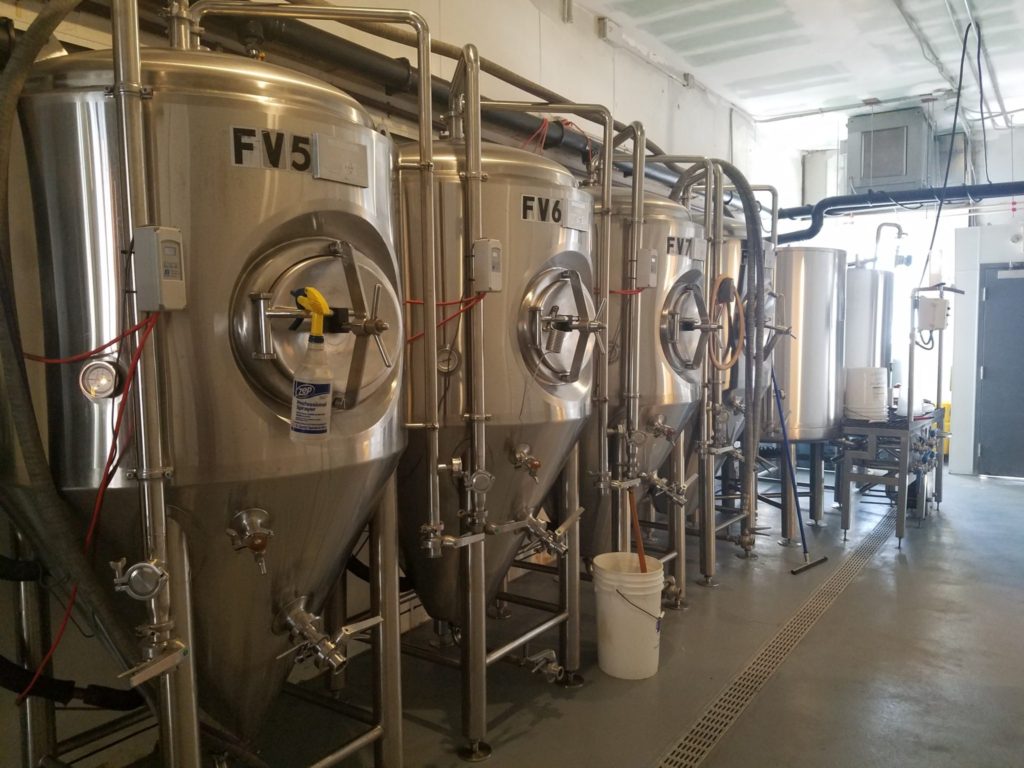