After a few stops along the way in Orando, we made it to Tampa. In our travels, we’ve become accustomed to having 3rd wheels or couples tag along.  In Florida, we figured we would just chat up the owners, brewers, bartenders and locals at every stop since we don’t have any friends in the area.  Then the small worlds collide and we find ourselves picking up “Little Lauren” at a hotel in Tampa because she’s in town working on event planning for the NHL.  We barely see this woman when she’s actually in town so how we just happened to be in Tampa the same night as her is really mind blowing. So we took the opportunity to check out a couple Tampa breweries for the night!

If you’ve heard of any Florida brewery, chances are high that brewery is Cigar City.  Directly West on 275 in a small neighborhood district you will find Cigar City Brewing Company, one of the greatest Florida breweries.  Now I’m sure you’ve heard of the world famous Jai Alai IPA, and now being at the brewery itself made it our first choice to sample going in… Until we looked at the board.  There were 22 beers on draft, and only three of us so we made a game time decision (perhaps heresy) to not partake in a full 5oz taster of Jai Alai in order to pursue more unique options.

Since we did have Little Lauren, we were fortunate enough to sample 8 different brews that night at Cigar City but I’m going to highlight our favorite four in no specific order.

Lactobacillus Guava Grove: A guava sour with tons of guava taste, and not enough sour for face puckering.  Which is a pro in my book.  It was extremely sweet though, so 5oz should be enough for people who dislike sweet/sour beers.

Hop Series IPA – Hallertau Blanc % 06297: A one off beer that probably won’t see the light of day again in this form.  That should come as super depressing news to hopheads.  The only light at the end of the tunnel for this one off beer is that the series has plenty of room to perfect this variant.

Margarita Gose: Exactly as advertised. This is a literal margarita to the point that it can’t possibly be a beer.  Certainly the most impressive beer on our flight that night, and a must try if you visit.

Cigar City has a large taproom, great tours (from what we hear), food trucks and a wide range of beers that will please even non-beer drinkers (actual heretics).  By chance your trip companions really detests beer and ask you to skip Cigar City, politely inform them that they have local wines and ciders and to quit their bitching when visiting a beer Mecca.  Cigar City is your must stop at Tampa scoring 5 high-speed pelotas out of 5. 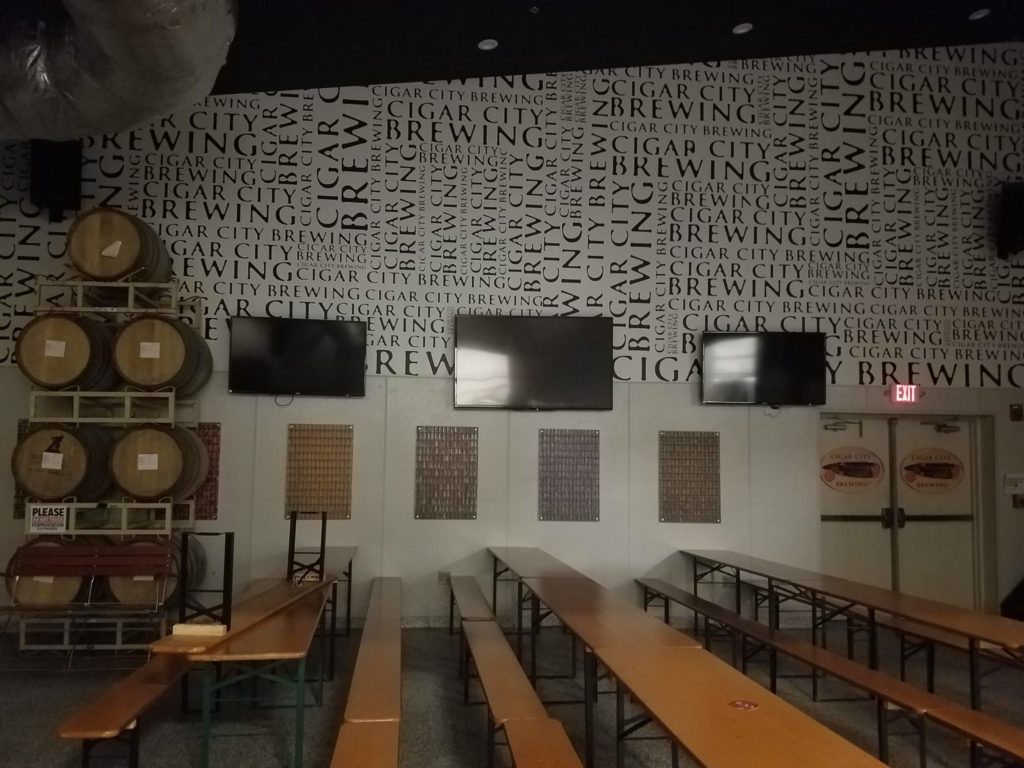 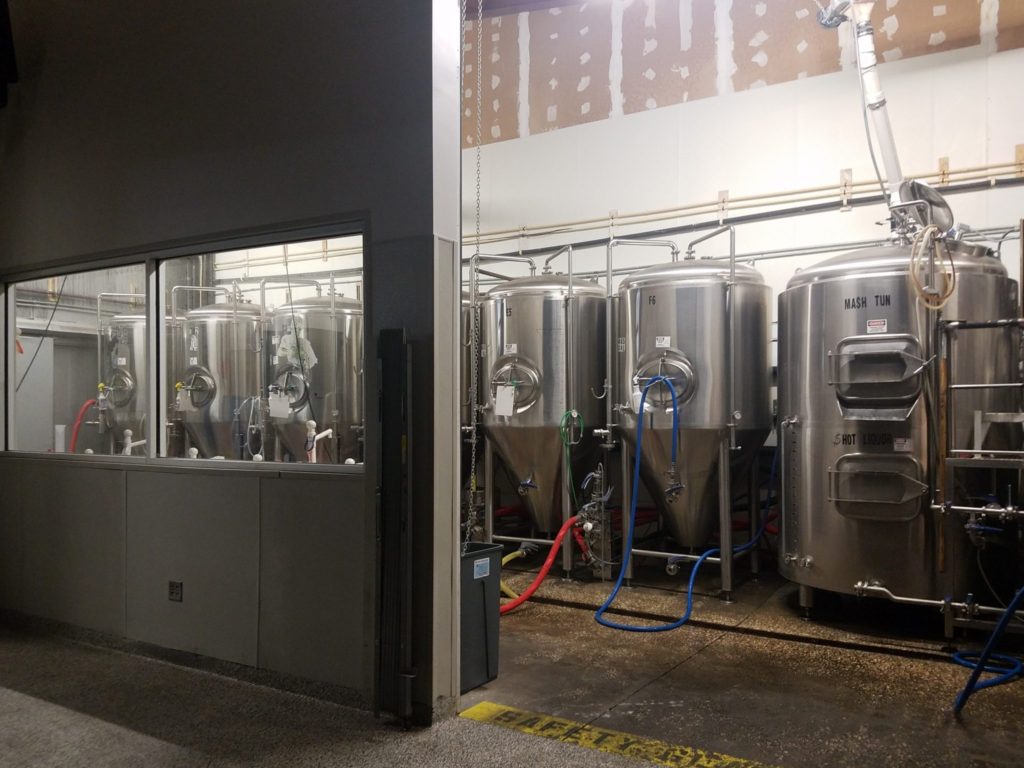 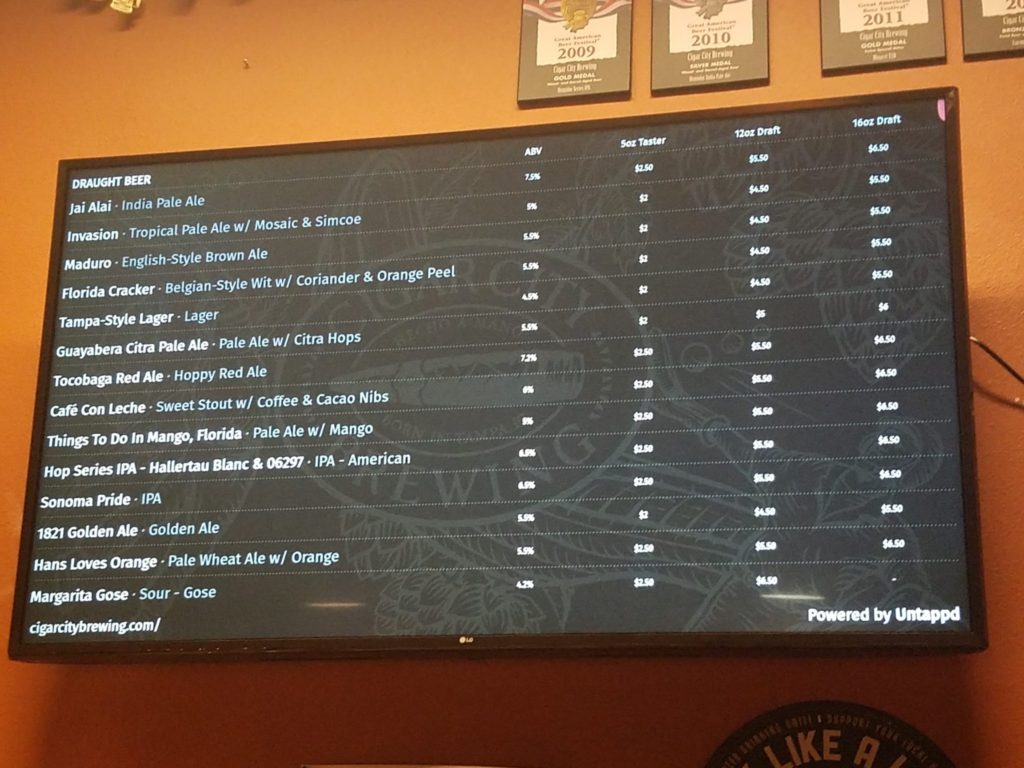 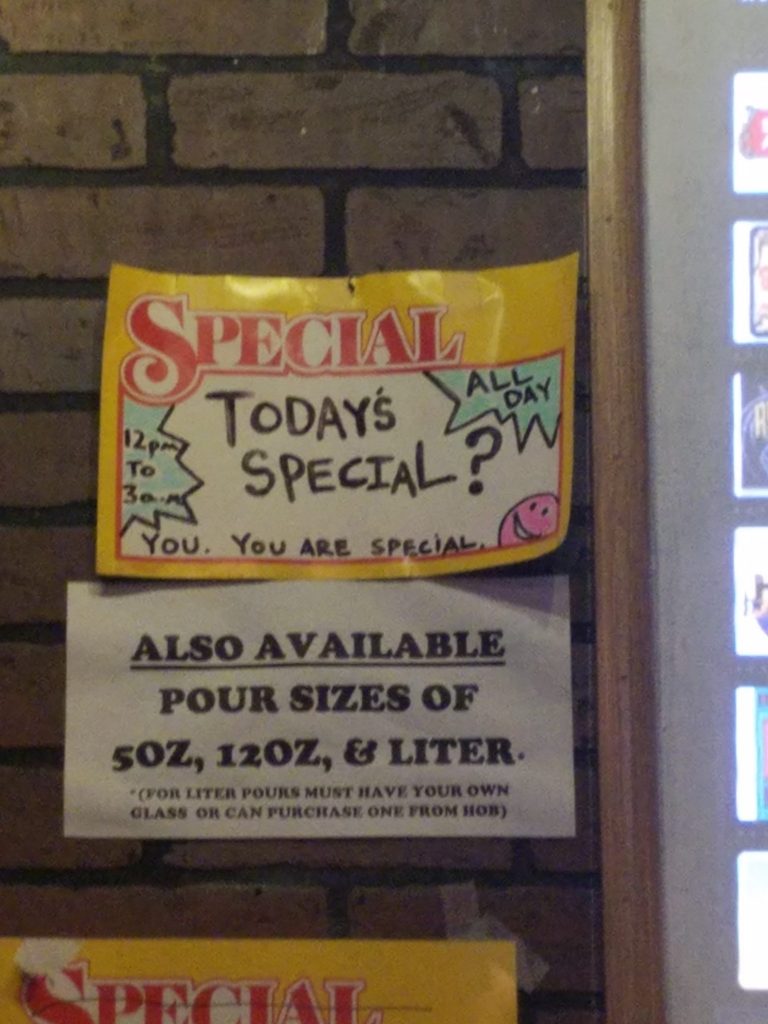 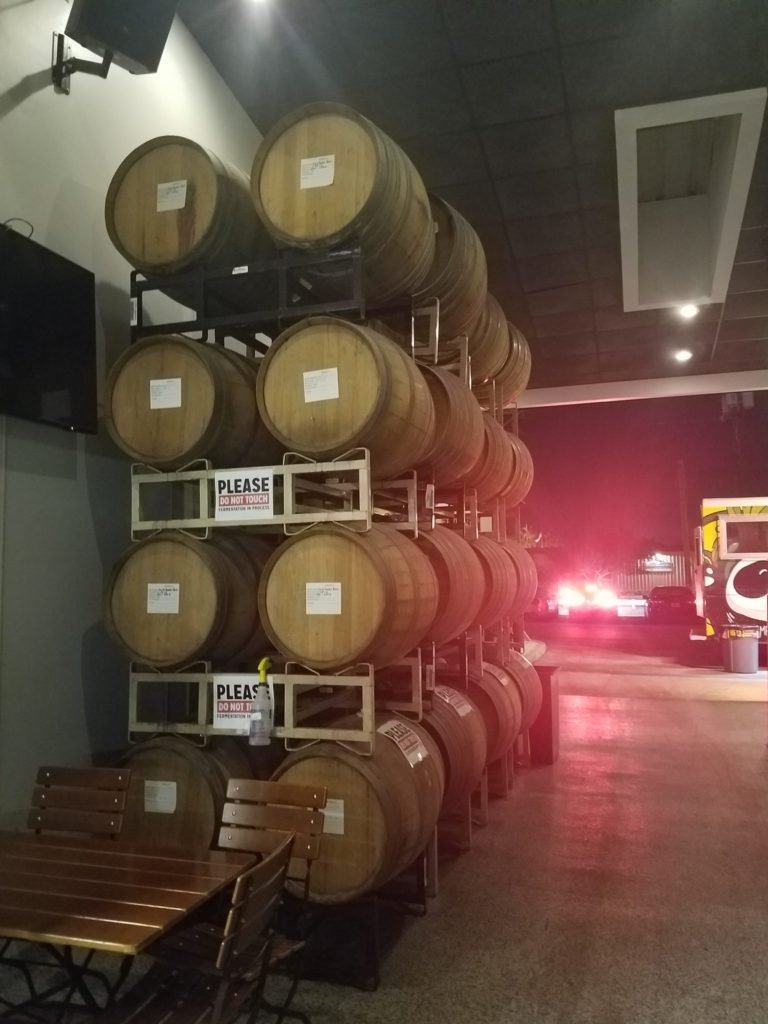 The hours are waning fast, Lauren has work in the morning, Melissa and I are pretty burnt out from starting in Orlando and making it all the way to St. Petersburg to check into our hotel, Bay Palms Waterfront Resort; which we highly recommend.  We had one more stop on the agenda that night, and that was at 7venth Sun Brewery in Tampa proper and not their second location in Dunedin.  Like most breweries, this place was pretty hipster, hosted a large patio space and even larger taproom picnic table seating.

Like Cigar City, the tap selection at 7venth was also super impressive, flights came in five, so naturally we sampled 10 of the finest suds; but lets do a top four here as well.  In order from least to most favorite we had the Project Popsicle IPA, Bank’s Closed Saison, Mangrove DIPA and It Puts the Cucumber on it’s Skin or it Gets the Gose Again!

Project Popsicle is a great IPA.  I wouldn’t say that it actually reflects a popsicle, but it was a citra juice blend (not quite a bomb), with a sourish finish so I can certainly see why they named it as such.  Bank’s Closed was a flawless saison aged in Sauv Blanc barrels with a perky amount of grape musk.  Certainly not for everyone but if you enjoy Dogfish Heads Noble Rot, this will certainly tickle your fancy.

Mangrove was the my highest scoring DIPA of the day.  Best DIPA on the trip? Maybe. Certainly top 5. Mangrove is a glass of juicy goodness in a mighty 9.7% body that hid the alcohol super well.  Many DIPAs that pass 9% feel forced and way too boozy in my opinion, but this hit all the right notes.  Lastly, “It Puts the Cucumber on it’s Skin or it Gets the Gose Again!”  is a perfectly balanced lime and cucumber gose thats a mouthful to say in conversation.  The trend in Florida is looking to be strong representation in the lime and sour department; and Melissa is O.K. with that.

7venth Sun has a great space, and an even greater beer selection.  There was nothing we disliked about 7venth Sun, but a few of the beers on our flight did only score 2.5-3 on Untappd. We realize you can’t win our hearts in every beer, and the four listed above certainly make up for their more simple counterparts.  We’re confident in recommending 7venth Sun of Tampa as a must stop brewery with our score of 4.5 out of 5. 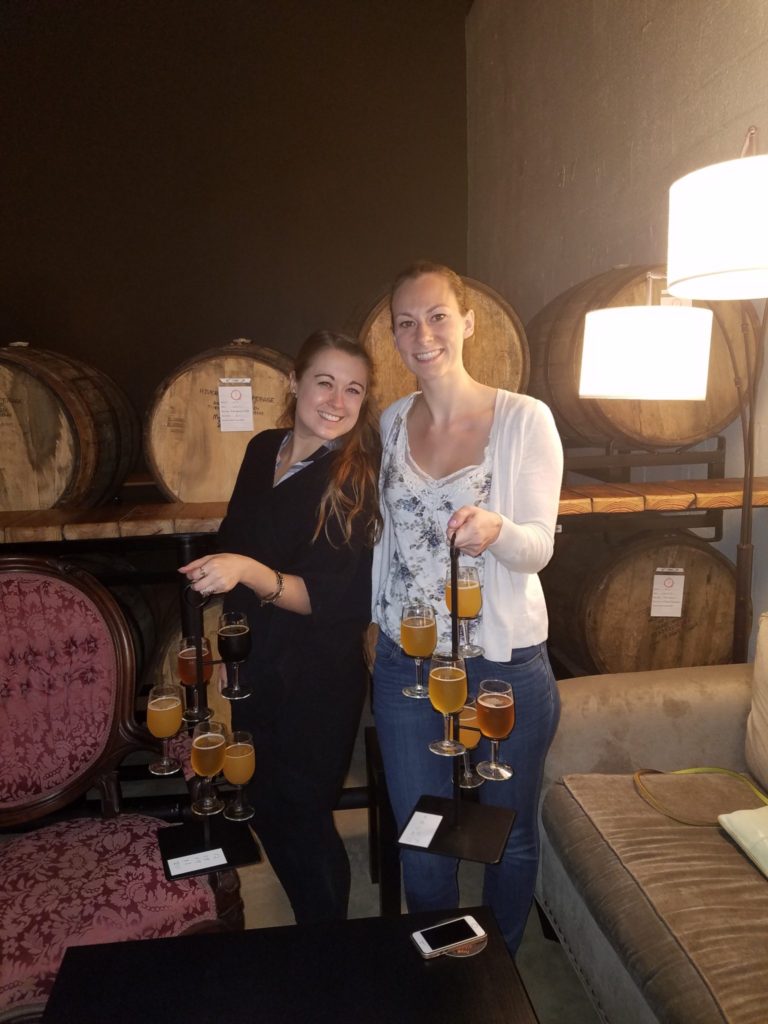 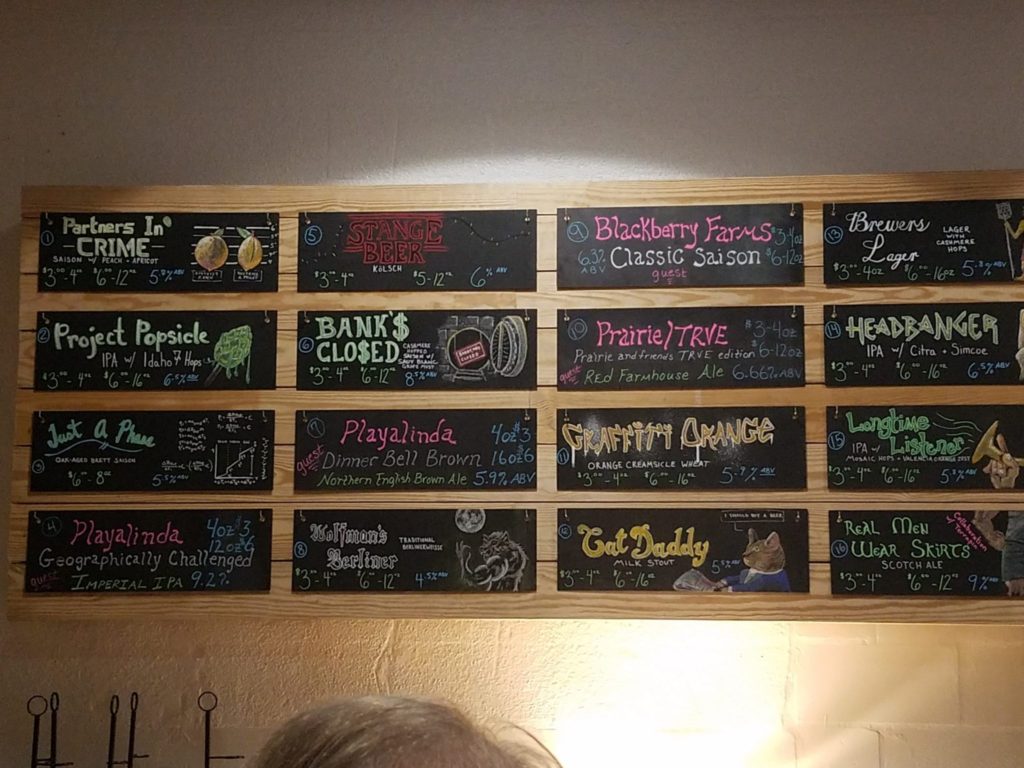 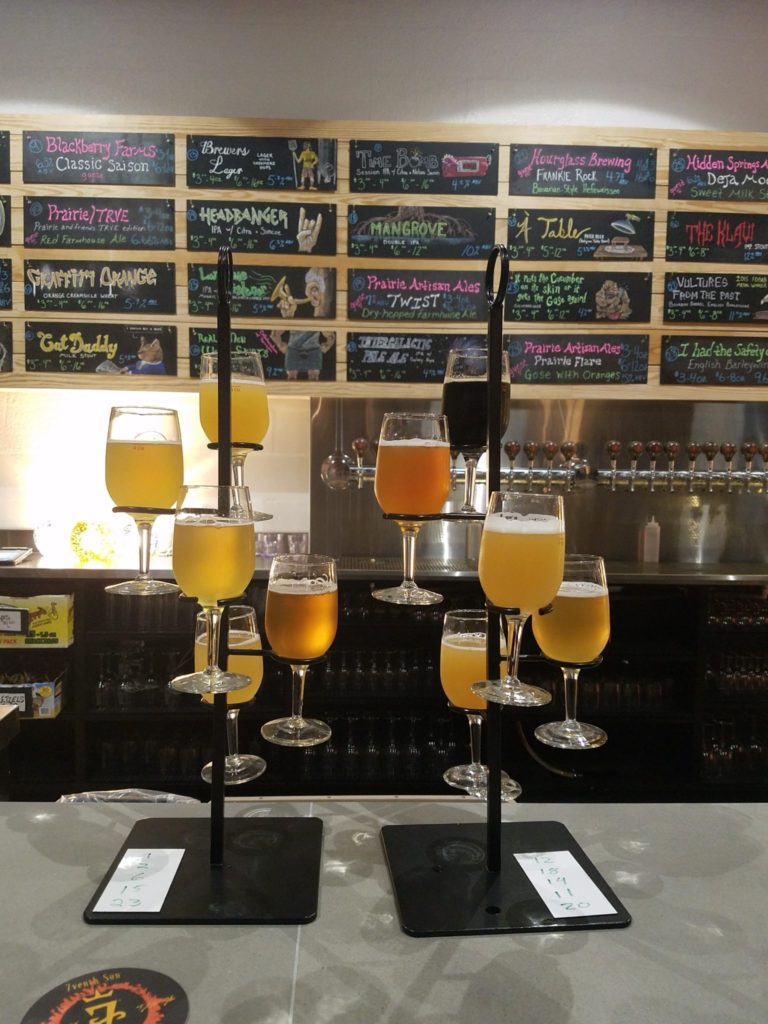 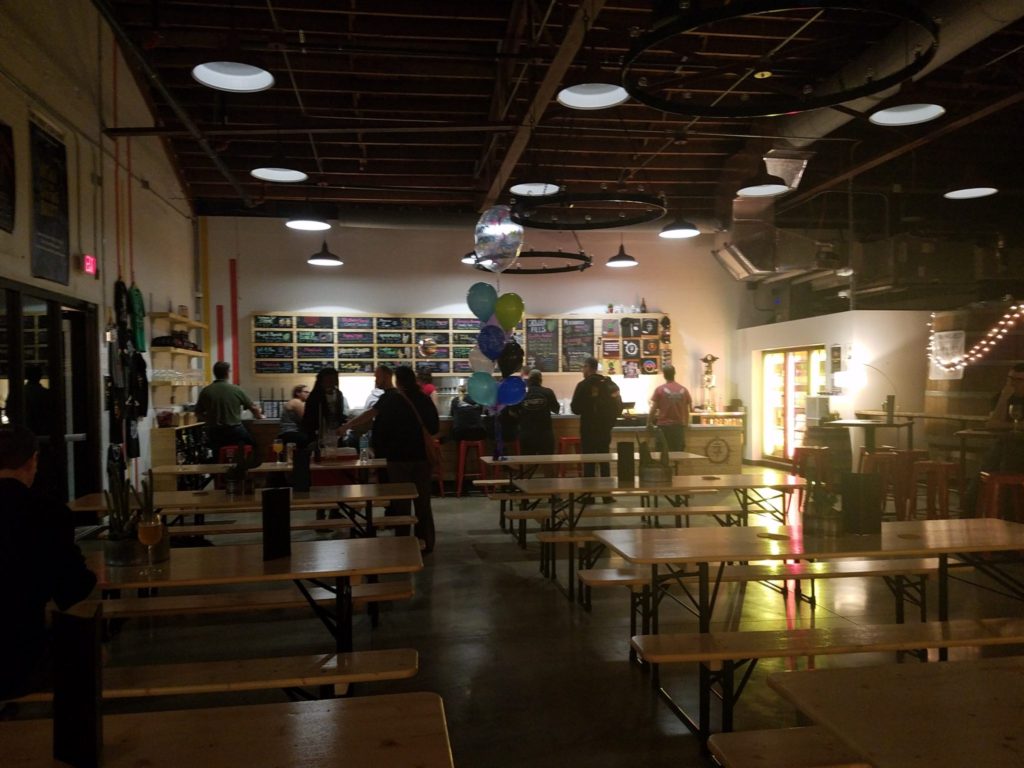 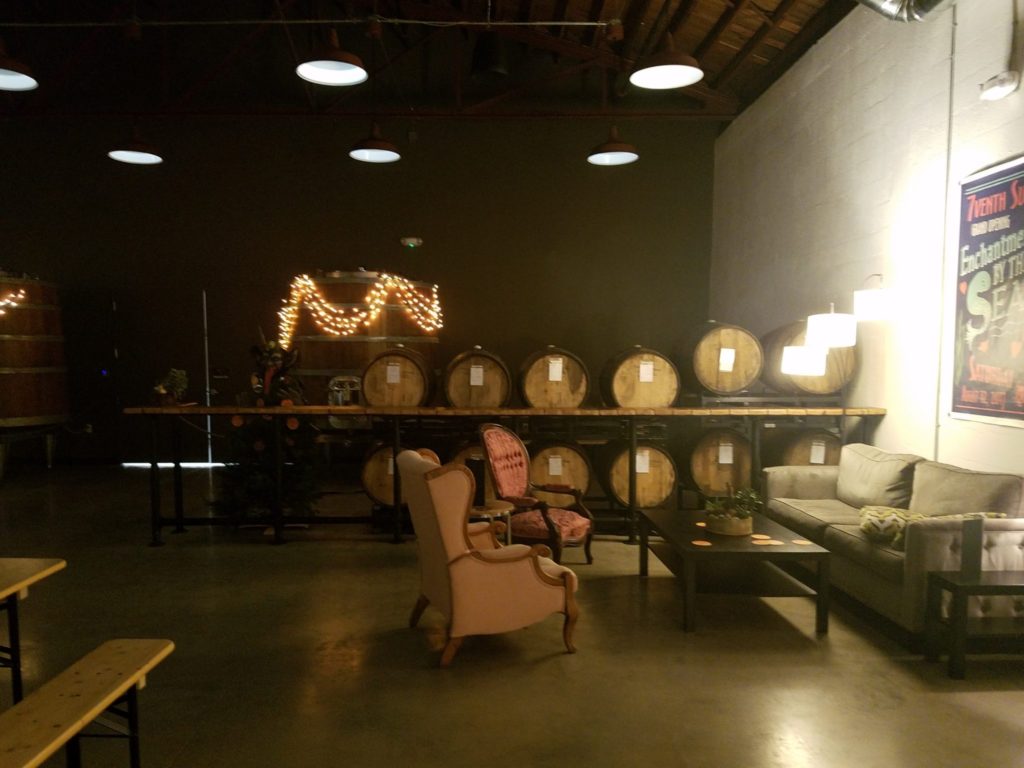 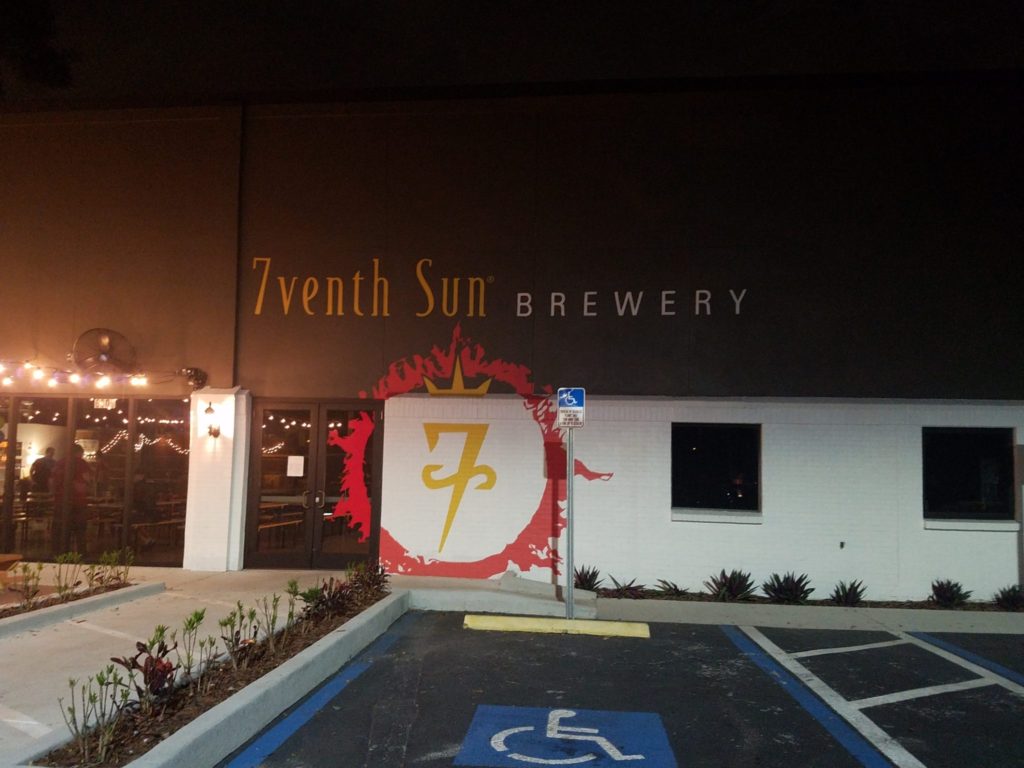 Florida is shaping up to be a wild trip, but we’re now into late into the night and calling it quits until tomorrow.