On the northwestern outskirts of Richmond, VA reside several breweries, a few cideries and distilleries in an area known as Scott’s Addition. Conveniently for us, many of these places are walking distance from each other. Parking was pretty tight on the roads closer to our next stop so Uber/Lyft if you can; this area really is a hotbed of alcohol related activities. This district alone would take a day and a fistful of cash to clear. Oh, and the two breweries after we hit Veil were a complete adlib on our part and not part of our original itinerary.

Deep in the heart of this alcoholic region of Richmond resides one of the state’s best; The Veil Brewing Company. Despite its monotone industrial atmosphere, Veil Brewing Company serves everything but the drab. Unfortunately, this is another brewery that doesn’t pour flights so be prepared to get ½ pours if you want to maximize the flavor consumption.

While there were several appealing options on draft, we were limited to three: Cat Boy DIPA, Never Meant gose, and Hornswoggler milk stout. Normally when you consume a flight you start with the lighter styles and abvs and work your way up to the darker, more potent or pungent beers to prevent numbing the taste buds. In this ½ flight, there was no good starting point.

The Cat Boy DIPA, is a slightly hazy, not quite juicy IPA with only minimal bitterness. This is one of the higher rated IPAs to come out of the Veil, and its apparent why. We’re still not quite sure how they masked the 8.4% abv, but they did it. Even more entertaining are the untapped check-ins saying that this IPA still holds up months later. Not that we recommend neglecting an IPA because that’s just cruel.

The Never Meant gose was Melissa’s and Kyles favorite of the flight. This tart gose was laced with tons of peach flavor and was reminiscent of candy peach rings; in a good way because I love those things. Obviously, this beer will not pierce your veil if you’re against sours to begin with and will only cater to those who prefer sweeter brews.

Although it was not my favorite beer of the flight, the Hornswoggler milk stout earns the award for most interesting beer of the day. Jam packed with oreos and Reginalds Bourbon pecan peanut butter, this crazy concoction made for a unique and enjoyable experience. The beer itself tasted of oreo, bourbon, pecan and some peanut; although not enough peanut IMO. We would have scored it higher, but the nose was a little off putting and smelled like cheap vodka. All in all, this now out of production beer was rather wonderful to enjoy in a small quantity.

Even with our modest flight, it’s apparent that the Veil Brewing Company has mastered a wide array of beer styles and brewing techniques to produce some of the most interesting and flavorful beers we’ve had in VA. Veil Brewing Company is your must hit stop in Scotts Addition and earns a solid 4.35 out of 5. 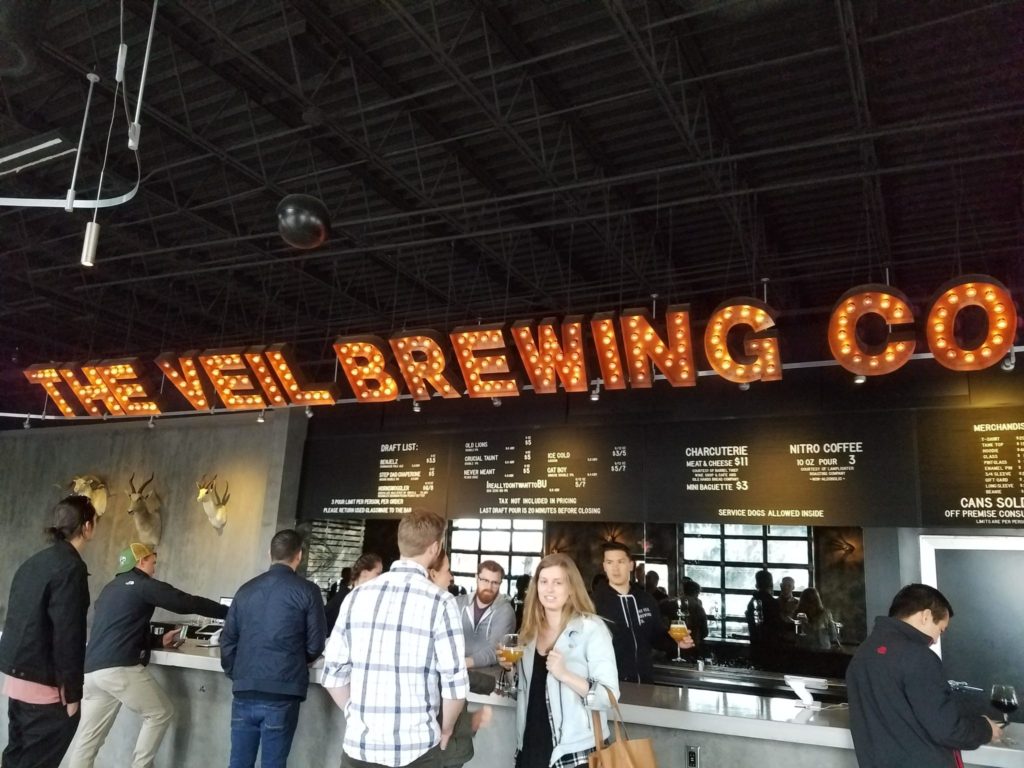 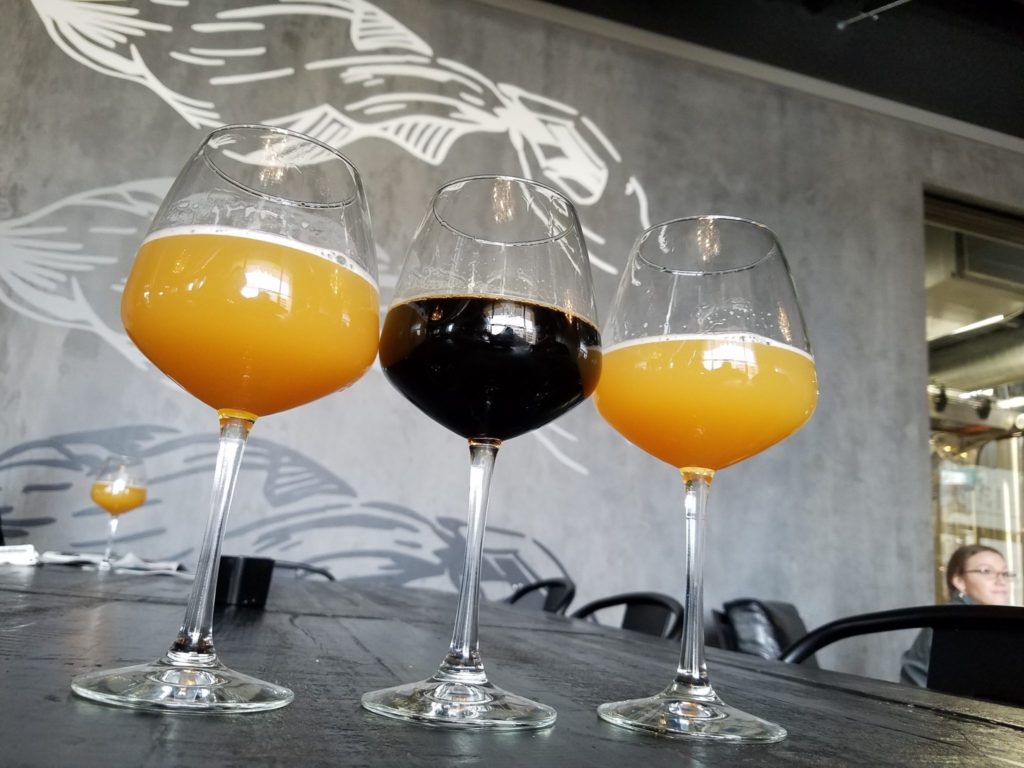 Because we were overwhelmed by alcohol in Scotts Addition, we couldn’t just leave without hitting another brewery or two. Just a block away from Veil was another lively brewery with a full patio (complete with puppies) and another stamp on our Richmond beer passport. Ardent Craft Ales didn’t make our initial list, but its close proximity to us, and the car, made it convenient.

Upon entering the brewery we immediately noticed a change in demographics. Instead of overwhelming mid-20/30’s hipster bros with beards, the age scale was tipped more towards the 40+ crowd of couples. Which was an unexpected shift for inner-city brewery patrons in our opinion.

The draft selection wasn’t overly sophisticated, but there were several to choose from while waiting in a rather lengthy line. Eventually we decided on IPA Batch #29, Imperial Milk Stout, Honey Ginger spiced beer, Defenstrator doppelbock (cask), New England IPA, Rum Barrel-Aged Dark Rye Stout. I’m going to skip over the IPA Batch #29, Imp milk stout and NE IPA because they were average; good drinking and well styled, but nothing eccentric to report on.

The Honey Ginger had two unique characteristics: 1) It actually tasted like honey and ginger and it will certainly not be for anyone who dislikes ginger. 2) They managed to hide 7.8% abv in the beer with what I can only assume is magic. The beer actually drank like a non-alcoholic beverage so we were rather surprised to learn the abv was indeed that high after re-consulting the menu and a bartender.

Defenstrator is an 8.7% doppel that is an annual collab between Ardent and Cask Cafe. Doppels are another style that you either love or hate as they tend to be a weird mix of malt and fruit. The nose and mouthfeel was in line with my expectations and it excelled in its complexity. The fruit and the malt were present in force unlike its lessor peers that taste like murky brown water. The 8.7% was also well masked, but still palpable on the back end; a little too palpable.

Lastly, the Rum Barrel-Aged Dark Rye Stout. This is a hearty, 12.5% imperial rye stout that took some time out of its busy, high octane lifestyle to mellow out in a rum barrel. And by mellow out, I mean if we didn’t know better we might think that the rum barrel still contained more than a fair amount of rum. While I’m not much of a rum fan, I think we can all agree that the flavor profile mixes perfectly with stouts. After polishing this dark rumcentric stout we were left asking “but why is the rum gone?”

Ardent didn’t even hit our radar until we were right on top of it; an oversight issue that happens every now and again. Unfortunately it happens even more so when we try and plan a 1 day excursion to a city like Richmond that deserves 3 full days at minimum. If you make the stop at Ardent you will learn that the beer is grand, old folks know how to drink, and the bartenders and staff appeared to genuinely love working there. Old(er) people know whats up at Ardent, and we give it a should stop 3.75 out of 5. 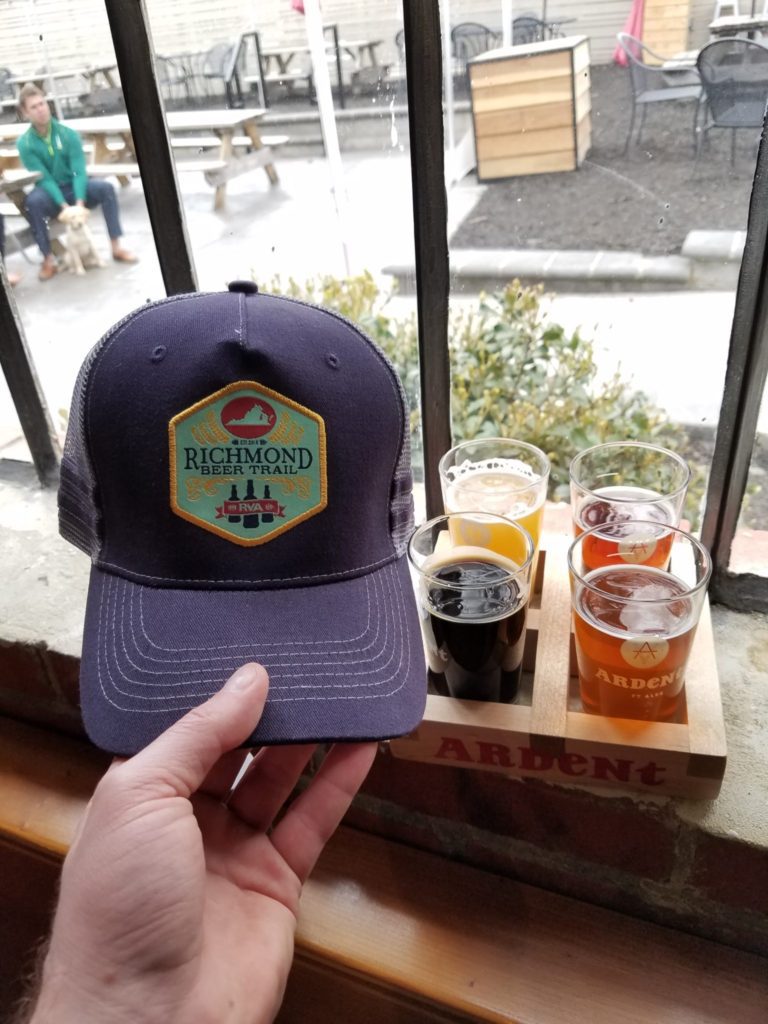 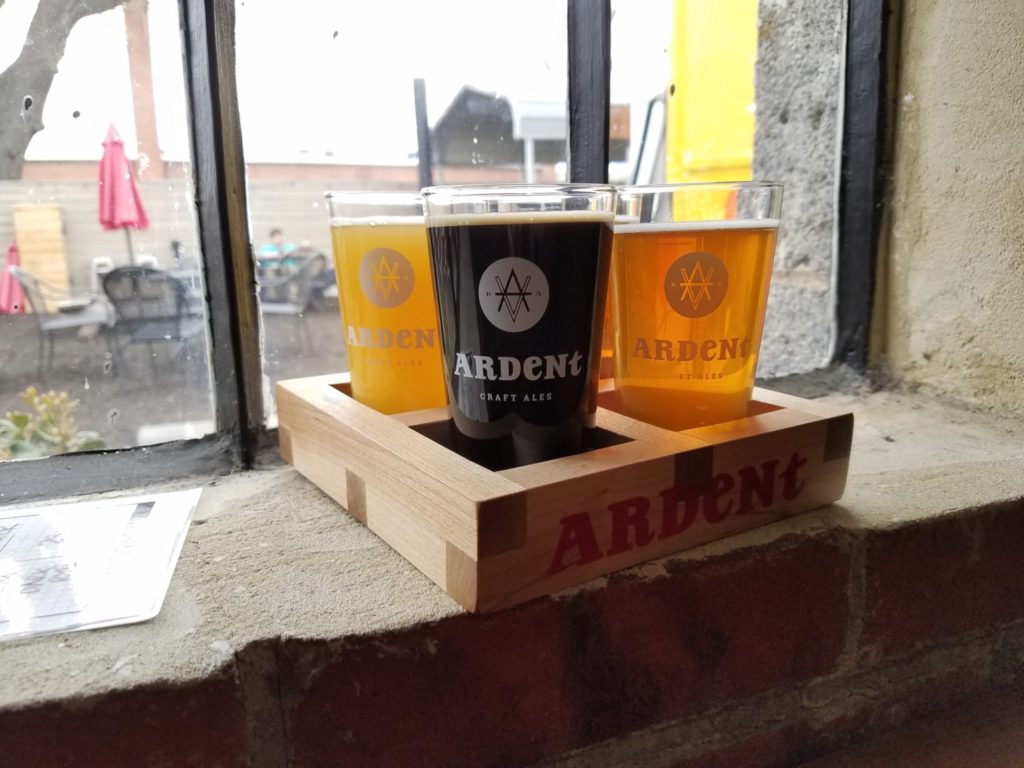 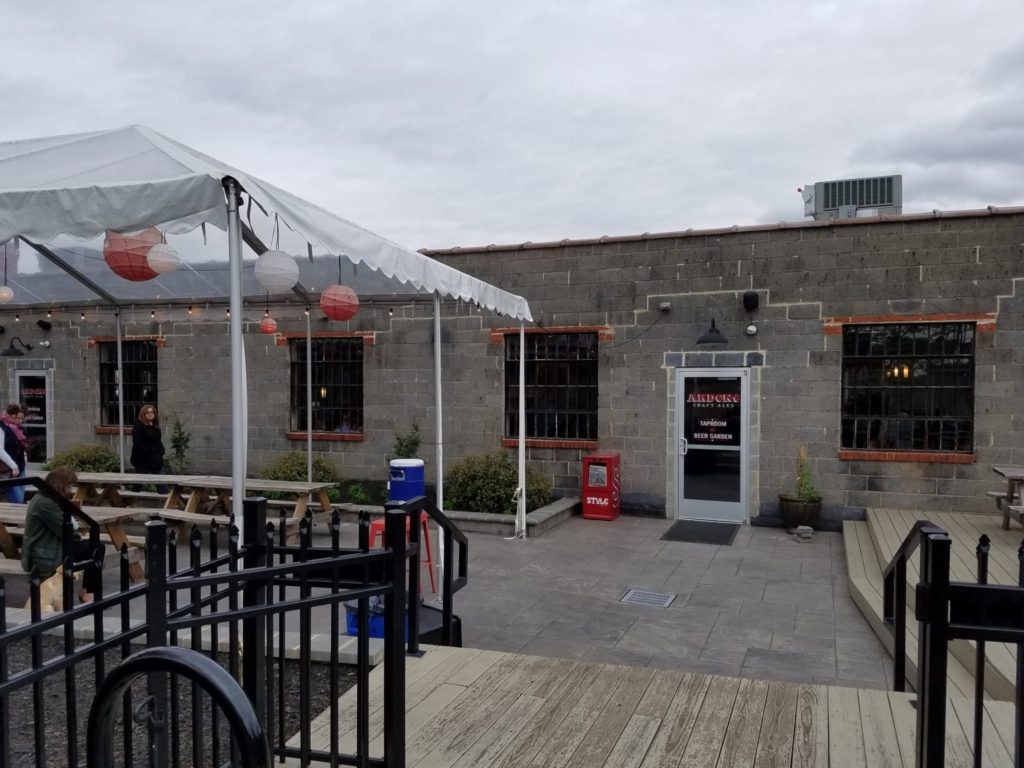 Not to be confused with Mos Eisley spaceport, the most wretched hive of scum and villainy. Isley Brewing Company doesn’t have a spaceport, or storm troopers, or aliens that don’t like your face but it does have beer. Like Ardent, Isley didn’t make our days itinerary either although we at least knew of its existence unlike Ardent. It was added to our list after speaking with a bartender and several patrons of Ardent who gave it high praises.

The atmosphere of Isley was slightly more upbeat than other factory to brewery experiences. Shelves of games lined one yellow painted brick wall and a small, beer aging barrel collection lined another. The place was busy but we did manage to get a table and play some Connect 4 while sipping on Plain Jane Blueberry blonde ale, Need for Greed black DIPA, The Bribe porter, Problem Child Belgian blonde, Ruby Red Grapefruit pale ale, and Choosy Mother Peanut Butter Porter.

The Plain Jane Blueberry had a strong nose, but like most of its peers, it fell short in the flavor department. This is could be a timing issue as fruit flavors tend to dissipate quickly, or it just never had enough blueberry in the actual beer. Need for Greed black DIPA was a standard take at a black IPA with a slightly higher than normal abv. There seems to be an assumed correlation that a DIPA is always better than an IPA but in many cases I would like to drink a lighter abv beer that focuses on flavor and not raw numbers; this seemed to be a beer that was more about the booze than the flavor in my opinion.

The Bribe porter is where the flavors started to strengthen. The brew was full of roasted chocolate and coffee flavors, which always leaves Melissa torn as she loves chocolate but has absolute disdain for coffee. It was an extremely great tasting porter, but it paled in comparison to Isleys other porter; Choosy Mother. Problem Child isn’t your average Belgian blonde. Infused in a bourbon barrel, this blonde had full oak notes with some of the tanginess you expect from a Belgian with almost none of the bland blonde flavor. It certainly was a uniquely picked beer to ferment in bourbon barrels, but we all agreed it was a rather enjoyable sipper. The Untappd scores from Isleys other patrons are really all over the place; everyone’s taste buds are different and it seems like half agreed that this beer was confusingly wonderful but the other half thought it was too complex for its own good.

The two best in flight options were the Ruby Red Grapefruit pale ale and the Choosy Mother Peanut Butter porter. Since I’m not a grapefruit person I gave this one up to Melissa. The flavor profile was literal grapefruit and my face is puckering just thinking about again. Choosy Mother Peanut Butter was liquid peanut butter goodness and was exactly what I was looking for from the Hornswoggler (Veil). Obviously it wasn’t Oreo packed like the Hornswoggler, but we enjoyed it so much that we made the rare crowler purchase to bring some home with us. Many peanut butter beers come with that chalky, gritty mouthfeel, but I’m happy to report that this was not one of those beers.

Isley Brewing Company was initially ruled out of our day trip plan, but we were certainly happy to stop by based on the raving local reviews. While I didn’t have much love for the first two beers, the following four showed up in full force and three of them expressed uniqueness worthy of bringing to a bottle share. If you’re in Scotts Addition and plan on hitting Veil and Ardent, you should also make a stop at Isley that earned itself 3.9 severed arms out of 5. 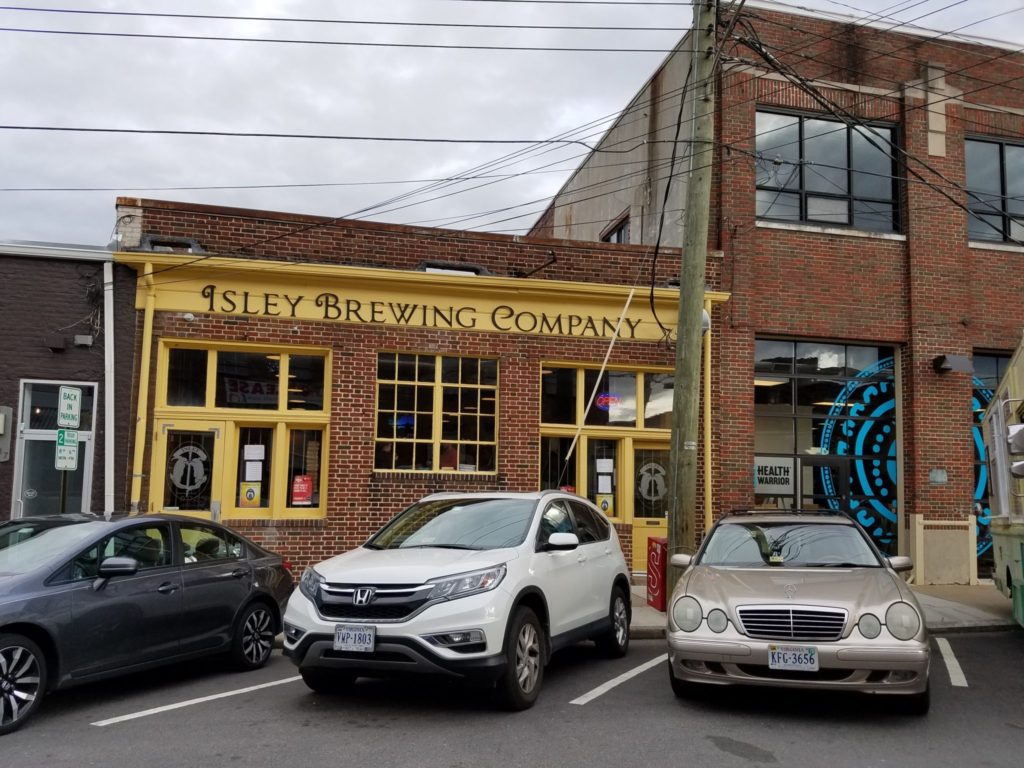 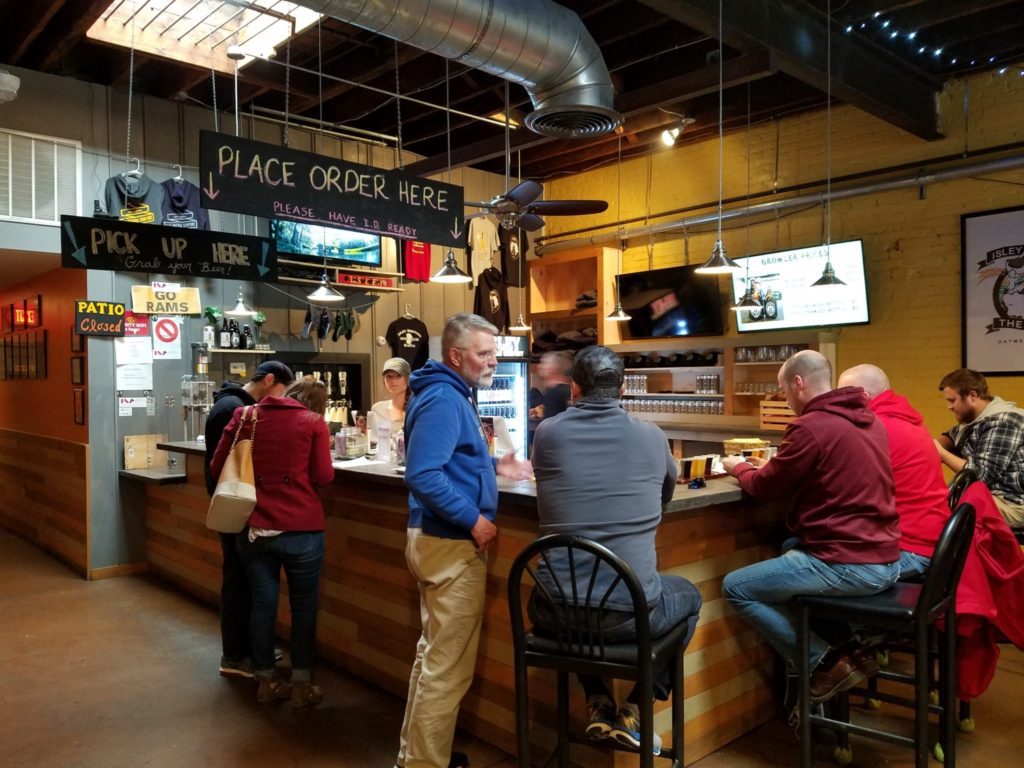