Many people might say that drinking beer at 11 am is a sign that you’ve officially hit rock bottom. Thankfully our hobby, beerventuring, means that drinking beer at 11 am makes us professionals.  It separates us from the amateurs, the boys from the men, the connoisseurs from the alcoholics.  So while you’re silently judging us and questioning if we’ve actually hit rock bottom let me dispel any doubt.  Damn straight we did.  At 11 am, we hit Rock Bottom Restaurant & Brewery.

This national chain restaurant is owned by the same holding company as Gordon Biersch, but the beer is substantially better because the onsite head brewer holds a fair amount of power.  Since we were there at 11 am and were the only people at the bar, we got to meet the head brewer himself!  Geoff is a one man brew team at the Bethesda location explained to us the unusual bond between local branches and corporate office.

Let’s talk about the beer.  If you’re at the Bethesda location you really need to drink the Hop Bomb and the Bourbon Barrel Atom Smasher.  Without question, these were two of the best beers we had on our DC excursion.  And at a whopping price of $5.25 for a flight of 6 beers, you cannot go wrong. 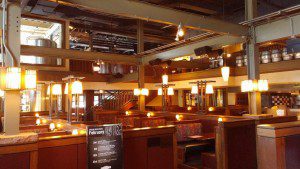 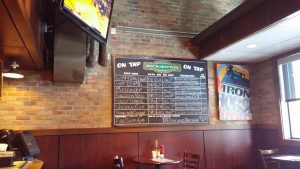 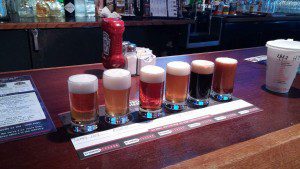 Rock Bottom of Bethesda is a spacious and swank brewpub with a local flair, two bars and two pool tables.  This would be the ideal place to throw a Happy (or Hoppy) Hour with your co-workers.  Rock Bottom earns 4.25 atoms smashed out of 5.

OMG WE HAVE FRIENDS! Nate and his lady friend Dani have now joined us for the remainder of our DC Valentine’s day extravaganza.  And yes, I spelled extravaganza without the use of spell check.  Since 11 am was too early for Nate & company to start drinking, we met them at 3 Stars Brewing Company in Washington, DC.  Now we’ve seen some sketchy back alley breweries before, but this old beat up industrial park in the middle of a residential neighborhood is certainly a top 10 places for serial killers to live.

I couldn’t believe how packed an industrial park was.  People were parked all up and down the road.  Crazy, who works on a Saturday afternoons anyways? This can’t all be for the brewery right? I mean how big could this place b….. holy sh*t.  3 Stars is bigger than you would expect.  This building is so big it literally has two other buildings inside it; a bar/bar and a home brew store which also had a bar.  Not to mention the other tap offering on the main brew floor next to the cornhole.  There was literally three bars in this place.  And they all had different beers, oh, and free samples.  3 Stars, had we let it could have been another all day affair brewery.

More people = more flights.  Fortunately these beers were not filler beers and they were all very well balanced and distinct.  Oddly enough though, we had a unanimous decision for the top two beers from 3 Star: Starsky & Dutch (milk stout) and the Raspberry Dissonance (Berliner Weisse).  My honorable mention goes to the Citra & Lemon Peel Saison.  Only get that brew if you’re into true farmhouse ales, because it was real farmy, like wipe your boots off before walking on the porch and leave them outside on the mat farmy.

With three tap systems, the home brew store, corn hole, tours given by the owners, and the pull pork food truck outside, there was very little to not like about 3 Star.  Unique top shelf beer, excellent use of space and a fun atmosphere easily qualified 3 Star for additional 1.75 stars.  This is a must stop 4.75 out of 5.

Right down the road from 3 Star was what we had hoped to be our first biker bar brewery experience.  With a name like Hellbender Brewing Company, could you really blame me? I was really looking towards a cliché mid-day biker brawl.  Smashing beer bottles over heads, people being thrown out of a window and a barmaid tossing a drunk 3x her size out of those  wooden saloon style doors; or anything else really rowdy.

Nope.  Instead we were met with one of the chillest breweries we had been to that weekend.  The Hellbender, aka Cryptobranchus alleganiensis, is a species of flat headed, aquatic, giant salamanders native to eastern North America.   Like the guy pictured below.

10 minutes into beer flights and chill when the Hellbender gives you that look, amirite?  Ok, enough with the corny jokes and education we’re here for the beer.

Hellbender Beers: Red Line Ale (red), North by Northeast (stout), Hell’s Horn Imperial IPL, Scorched Black IPA, Hop Trois (saison).  I feel like our DC trip thus far has been a plethora of average beers and unfortunately our streak continued at Hellbender.   While the stout and saison scored relatively higher than the rest of Hellbender brews, there was nothing really mentionable here.  Had I been a local, I think 3 Star would be my go to for more unique brews and the Hellbenders would be a backup fridge beer for friends who were just being converted into beer drinkers.

Another brewery and another corn hole set.  These things are practically staples at breweries nowadays.  Even with the beer and corn hole, there just wasn’t enough to keep me as a repeat customer.  Hellbender gets a 2.75 river monsters out of 5.

Atlas Brew Works is an easy spot to miss.  Nestled in an industrial district, this steam punk brewery was a hoppin hipster paradise.  It’s pretty hard to describe the interior but imagine if A Clockwork Orange took place in a bar on Hoth that was run by World of Warcraft Gnomes.  Sorry that’s the best I can do. Just google some pictures but make sure you get the right Atlas.

The beer: Another average wheelhouse, or average cog in this case.  Whatever steam punks would say.  Rowdy IPA, District Common, 1500 South Cap Lager, La Saison des Fetes, Ponzi and Pumpernickel we’re on the menu that night so we split our tasting with Dani and Nate.  Melissa was more partial to the Pumpernickel Stout, I enjoyed the Ponzi (mostly because the accountant in me had an erection) while Nate enjoyed his Rowdy.  Dani, not being the biggest beer person casually sipped the lager and waited patiently to move to a warmer brewery; which brings me to another point.

Atlas, I get the theme (Hoth), but you could use a little more heat in the tasting room area during the winter.  Maybe throw up a tarp across the receiving bay area.  Then again, that place is probably Mustafar during the summer.  As I type this, I can only imagine Melissa trying to figure out what the hell I’m talking about. “You were the chosen one!!!”

Atlas has a cool location, lively patrons and fun bar area.  But again, the beer was not unique and the establishment wasn’t warm enough to keep us around for another round.  Atlas receives two and a half downed T-47 airspeeders out of five.  Melissa still has no idea what I’m talking about. 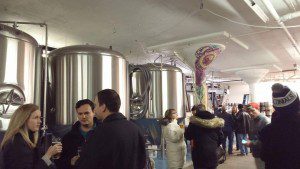 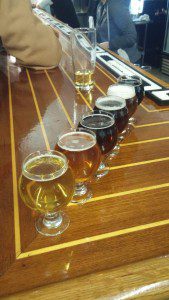 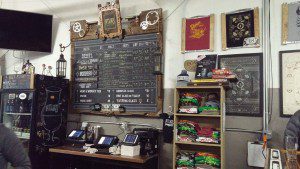 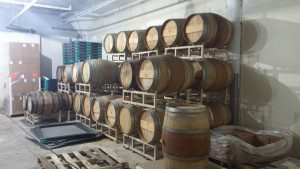 It’s officially dark, cold and time for dinner.  Will Andrew and Melissa continue their pizza excursion as well as their beerventurers? Absolutely.

Right off the bat we noticed this place is packed with a good mix of both families and friends; we now have high hopes for the pizza as well as the beer.  So, as per usual we ordered a pizza and flight; Thai pizza and all the beers on draft plus one of their bottled beers.  Get the Thai pizza, you won’t be disappointed.  As far as beer goes, they had a distinct selection but nothing extremely satisfying.  The Purgatoire and Right Place, Wrong Time (bottle) were the two wild ales on the menu that night and the most unique beers we’ve had all day.  The Mo Citra Mosaic was by far the most pallet satisfying experience out of the two IPAs on draft.  The rest of the flight wasn’t worth mentioning. 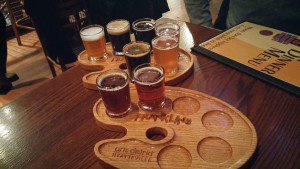 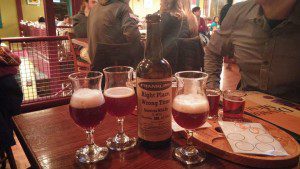 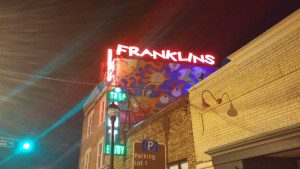 As beerventurers we enjoy going to breweries where something is a “first” for us.  In this case, the general store attached to Franklin’s was a first and certainly a funny treat.  Think a Spencer’s Gifts + candy store in an old fashioned Wild West themed store.  If you stop at Franklin’s, make time to visit the gift shop for a bunch of laughs, gag gifts and old school candy.  You can also pick up their bottled beer, which I do recommend the Right Place, Wrong Time for those sour fans.

Franklins Restaurant, Brewery and General Store gets a 3.75 candy penis pops out of 5.

*As a side note, our waitress had one job. And she failed. But that’s ok, we still like you and your receipt doodles. 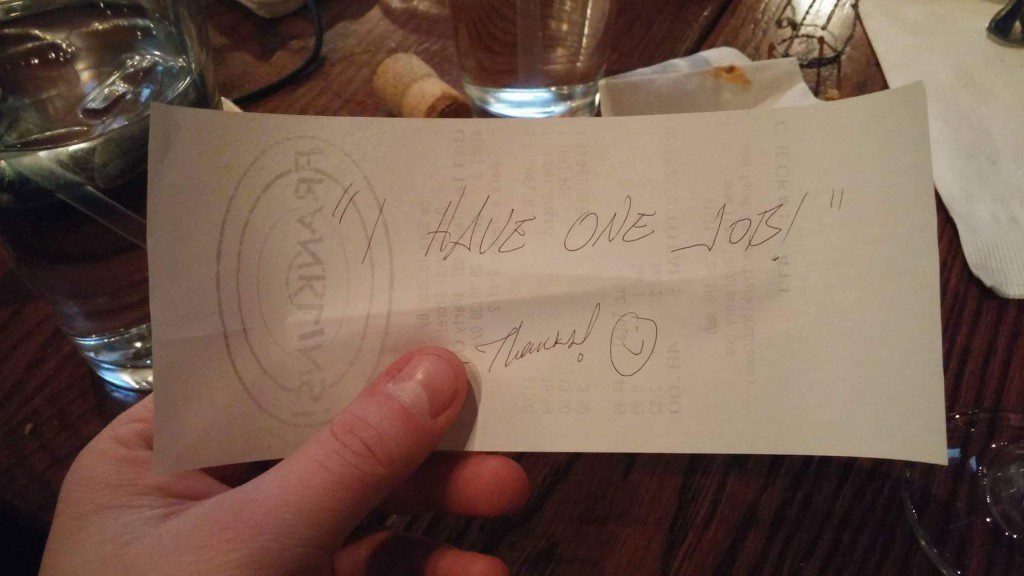 Old Dominion BrewHouse. I’m not going to spend a lot of time on this place.  If there was a place to avoid, especially at night, this is the one to skip.  This chain brew house catered to a rambunctious crowd near College Park in Hyattsville, MD.  The beer itself wasn’t terrible, it was just very average.  The hefeweizen was the best beer on draft and quite frankly it was pretty tasty.  Really the mood killer was the intoxicated local’s double fisting hard liquor screaming at the TV’s over the slam-dunk competition.  This is just one of those places where you walk into and are immediately out of place.  Or maybe we just weren’t drunk enough to engage the locals; who knows.  Either way, this brewhouse should drop brew + house from its name and replace it with “bar”. 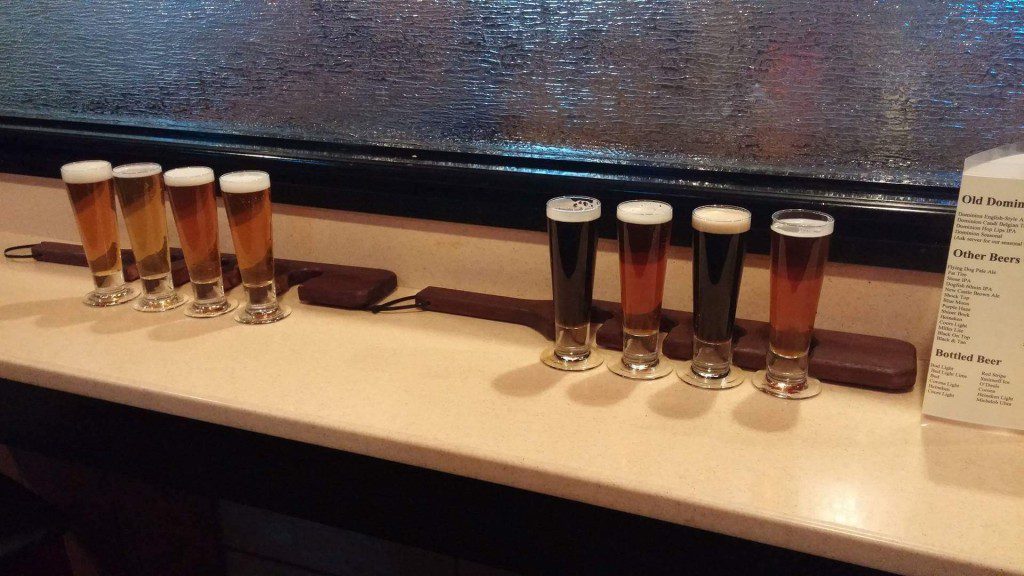 While Old Dominion of Hyattsville had a fair flight, and one really good brew, I could not recommend this place to anyone traveling with your S.O. or children.   Old Dominion BrewHouse gets a 1.25 obscenity per sentence out of 5.